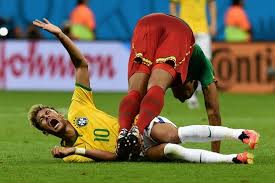 The only thing worse than being subjected to World Cup Soccer talk 24/7 by folks who didn’t know if the ball was puffed or stuffed mere weeks ago is being ostracized by the “elite” of the sporting public for daring to say that you think soccer sucks.

There, I said it Bob Ryan, it sucks.  It is a boring sport played at a boring pace by a bunch of wimps that act like they have been beaten to within an inch of their life if someone simply makes contact with them.

Feel free to string me from up your proverbial holier than thou non-sports fan flag pole for saying the equivalent of long distance running with a ball – that rarely results in scoring opportunities – is a waste of time ranking right up there with figure skating and the summer Olympics.

Look I tried, I really did.  For the first time in my life I actually tuned in – on purpose no less – to the US vs. Portugal last Sunday to see what the rest of the world found so exciting and to find out what I was missing.

While by force of habit my remote kept clicking back to the Red Sox nearly blowing a 6-1 lead to the Oakland Athletics, I switched back just in time to see the US team surrender a goal in extra time to the Portuguese team and suddenly – without explanation – the game ended in a tie.

Two things, what the heck is extra time and why does only one guy know when it ends?  What sport known to man that is worth even casually watching – other than baseball and golf – does not have a clock for both the participants and those watching to see so everyone knows when time is about to expire?

So I am to be left to believe that at the precise time that the ball went in the back of the net off the Portuguese players head (Another reason why this sport sucks, it is ok to use your head but you can’t use your hands?) that time expired, not a second before or a second after?

Then come to find out one of the reasons for the extra time was that one of the US players pulled a fairy fit and writhed on the ground in artificial agony for so long the referees saw fit to add 5 or so additional minutes that – of course – only he knew when they would expire.

First of all hands are so good that god gave you two of them.  Use them.  If you can’t use them to throw something, catch something, tackle something, shoot something or beat the ever living snot out of your opponent with them, I’m not watching.

I don’t want to watch a bunch of under-nourished marathoners run around playing keep away with a ball for an hour and a half just to have the only break in the “action” being an acting performance worthy of General Hospital.

They had fewer stretchers at the battle of the Bulge than they have had during this stupid footsies tournament.

Call me a troglodyte, call me ignorant, call me an ugly American, just don’t call me to tell me how great World Cup soccer is, ok?

And I love the nationalistic freaks who hop on board to cheer on team USA.  If I am not mistaken the team is coached by a German and has something like 7 players on the team that were born in some other country than the United States.

Its not like we are talking the 1980 Miracle on Ice team here people.

The United States is full of front running fraud fans that lick their finger and throw it in the air to see which way the bandwagon is headed before hoping on board.  The hysteria surrounding the US soccer team which is a mediocre 1-1-1 in a tournament that allows those who lost their last game to advance is just that, hysteria.

As someone much wiser than me once said, this too shall pass.