With their season slipping away yet again, a new road is necessary for the Red Sox 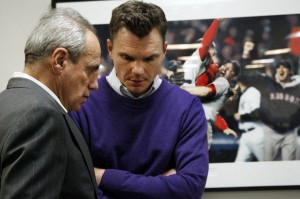 It is the final day in May, and the Red Sox find themselves in a position that has become extremely familiar for the third time in four years; at the very bottom of the American League East standings looking up.

On paper – a term that has been used with way too much frequency when describing this band of badly matched blockheads – the consensus coming out of spring was that the offense would make up for the deficiencies that the starting pitching staff clearly had. The idea was to play beer league softball style baseball for the first couple months of the season until, either a leader emerged from the group of third and fourth starters, or the front office made a move for a proven ace such as Cole Hamels from the Phillies.

Unfortunately for general manager Ben Cherington and skipper John Farrell, the offense that was supposed to save their bacon while they played a shell game with their pitching staff, has failed to sizzle. In fact, they have flamed out.

The Sox bats – once thought to be capable of producing up to 900 runs this season – sit at 23rd overall in baseball with a batting average of .240. They are 22nd overall in runs scored with 192, and they have .222 average with runners in scoring position, which ranks 26th in all of MLB.

The Sox top two moves of the off season – the big-money free-agent signings of Pablo Sandoval and Hanley Ramirez to long-term deals – have not had the impact that was anticipated to the Sox lineup. While Sandoval has been Sandoval against right handed pitching – hitting .308, with 5 home runs and a .860 OPS – he has been hardly been Rogers Hornsby from the right side of the plate, with only five hits – none for extra bases – in 46 at bats. 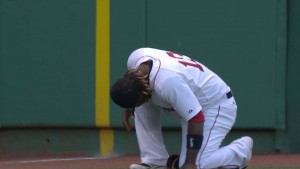 As for Ramirez, he started the season as if his first name were Manny not Hanley, hitting 10 bombs and driving in 22 in the month of April. He then hit a wall – literally – at the beginning of May, and has been impotent ever since. He has looked like a monkey making love to a football in left field so far this season, and has shown as much interest in improving his play in the field, as Manny showed in astrophysics in his time in Boston.

The way he lopes in left is already wearing on most in Red Sox Nation, and he will not get away with the “Hanley being Hanley” routine that Manny did unless his bat wakes up considerably. And the fact that the name Hanley leads the list for new dog registrations across New England for the month of May, cannot be something that helps the Sox GM sleep at night.

The Sox already made a sacrificial lamb move this season; firing pitching coach Juan Nieves on May 7th.  And while the move seemed to bolster the struggling staff for a couple turns in the rotation; they have seemingly slid back into their awful ways. There is little doubt if the wretched play by the team continues, the skids will be greased for manager John Farrell to be next up on the chopping block.

While you can debate the merits of moving on from Farrell this season – he is a poor in-game manager to be kind, and for an ex-pitching coach, he handles his staff like he is juggling a hand grenade – all roads regarding the responsibility for the team being in the basement again for the third time in four years should lead to Cherington.

Even though Baseball America ranked the Red Sox minor-league system second in baseball behind only Theo Epstein’s Chicago Cubs (Isn’t it ironic, don’t ya think?), five of the top ten of their prospects were selections made under the Sox former GM’s watch, and two are international free agents who the Sox threw the most cash at. Cherington has yet to show he can build a pitching staff, and he traded away three-fifths of the rotation he largely inherited last year, after winning a most improbable World Series title with them the year before.

As I have said in this spot before, it seems as if his only plan is to not have one at all, his penchant seems to be to throw as much stuff at the wall he can and see what sticks. He seems incapable of making a deal for major league ready starting pitchers – that are any good, at least – and what he got in return for John Lackey – who is 5-1 for the Cardinals and pitching for a league minimum $500,000 – at the trade deadline last year (Allen Craig who is playing in Pawtucket, and Joe Kelly who soon could be.), will go down as one of the worst swindles against the Sox in recent history.

When John Henry looks at the continuing under-performance of his franchise, and then looks to the Windy City to see what Epstein has done for the Cubs, he has to wonder if he chose the right guy when he let Theo walk and stuck with Larry Lucchino to run the Red Sox.

Time is running out on his team, and Henry has to know it. It is looking like the manager he extended in spring training could soon be looking for work, and if he is as smart as we all think he is, his general manager may join him in the unemployment office as well. And while the diehards will hang on, if only to throw the remote at the TV and have something to bitch about around the water cooler this summer, the pink hats that make for the big paydays he has become so used fleecing at Fenway, will be well on their way to the next big thing.

We all know the old saying, “Fool me once, shame on me. Fool me twice, shame on you.” If John Henry and Larry Lucchino think they can fool the baseball fans of Boston for the third time in four years, they may find that they don’t have as many fools in New England as they once did.