With the Habs again in their heads, it is back to the future for the Bruins 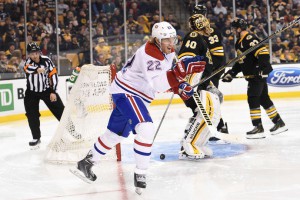 It’s back to the future for the Bruins, when it comes to the dominance displayed by the Montreal Canadiens over their redheaded stepchildren from the states.  The latest beat down, a 3-1 loss at the Garden last night, left the bleu, blanc et rouge a perfect 4-0 against the B’s this season, and kept them firmly entrenched in the heads of the players that call Causeway St. home.

Those of a certain age can remember when Montreal was a place where Boston’s Stanley Cup dreams went to die on an annual basis, and it seems almost certain to be etched in stone again this year, should the Bruins even make it that far.   And while the B’s beat the hated Habs on the way to a championship in 2011 – a series that took seven grueling games, and wasn’t decided until a seeing eye slapper off the stick of Nathan Horton found the back of the net in overtime of game 7 – much has changed since the Bruins drank champagne from Lord Stanley’s challis some four years ago.

First and foremost, Tuukka Rask now occupies the space between the pipes on a regular basis, and it is well documented how he struggles against the Canadiens.  In 16 tries, Rask has only beaten Montreal 3 times, and his save percentage drops to a Doug Keans-like .902 against les Habitants.  Those aren’t numbers that win you playoff series, especially against a team that right now that owns you like you read about.

In addition to Rask’s struggles, the Bruins are less equipped to handle the Habs trademark speed than ever before.  Zdeno Chara is a year older, and was never fleet of foot to begin with.  Also, the B’s blue line corps have been thinned with the loss of Johnny Boychuk being dealt to the New York Islanders just before this season, along with the departure via free agency of Andrew Ference two years ago to the Edmonton Oilers.  Those losses have hurt the Bruins depth on the backend, and have forced players like Adam McQuaid and Kevan Miller, to take on roles that they may not be capable of filling.

Lastly, Dennis Seidenberg is showing less agility these days than the Hindenburg, and it is beginning to look like his return to full health after having ACL/MCL surgery last January may never happen.

And while things may be a little dire for the Bruins on defense against the Canadiens, the offense hasn’t fared much better.  The B’s put the biscuit in the basket a total of 6 times in 4 games against Montreal this season, which – being the math wiz I am – comes out to an average 1.5 goals a game against Carey Price’s team for the year.  As much as I am sure head coach Claude Julien would love it, I am pretty sure the Bruins won’t win any playoff games this season by the score of 1.5-0.

The sad fact for Bruins fans is, not much is likely to change before the playoffs start in April.  General Manager Peter Chiarelli’s track record at the trading deadline – remember last year he gave you Andrej Meszaros, who spent more time in the press box than I did during his time with the team – is spotty at best.  Most likely the Bruins will be buyers on low priced, damaged goods like Buffalo’s Chris Stewart, in order to bolster their squad.  It is unlikely the B’s have the assets, or salary cap space, to provide a game changer for their defense.

So while they can talk about simplifying things and playing their game against the Canadiens should they meet in the playoffs, the fact of the matter is the Bruins, as constituted, don’t have the players to play their game.  Add the thinning of personnel both up front and on their back end, to the fact that Montreal has climbed between the ears of their best players – By the way, has Milan Lucic killed any Canadiens yet this season? – and you have the recipe for disaster that used to take place on seemingly a yearly basis every spring from 1944 to 1988.

When he was asked after last night’s loss if the Canadiens are now a psychological challenge, and have gotten in his team’s collective head, Julien said, “It can’t. We can’t allow it.”

I hate to say it, coach, but if you are answering questions like that, then I’m afraid they already have.