With the Aves in town, its time to talk about Matt Duchene again 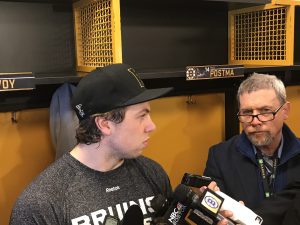 Finally Monday is here! The long layoff from Boston Bruins hockey has been torture. This matinee comes with the Avalanche ending up 1-1 after two games, one was a scrappy win over the Rangers where they were dominated in terms of possession, and the other was a 4-1 beatdown at the hands of the Devils…where they had an edge in possession. Needless to say, they’re pretty inconsistent. And very dysfunctional.

During the summer, Colorado Avalanche forward Matt Duchene made it known that he wanted out of Denver. One of the many teams linked to trade talks for the disgruntled center was the Boston Bruins. For a team that didn’t make a splash in free agency, and being a team that usually trades away big names rather than bringing them in, its interesting.

Many people predict that he won’t last the season in Colorado and will be traded at some point before the deadline. But for what price?

The rumor mill had Avalanche General Manager Joe Sakic’s asking price to all teams interested as incredibly high. When it comes to the Bruins, the pieces Colorado coveted included defensemen Brandon Carlo or Charlie McAvoy.

Here is one problem the Bruins would face in trying to bring on Duchene. He has a $6 million annual salary the next two years, and the Bruins are currently up against the salary cap, with only about $270,000 in wiggle room. There’s virtually no way to do a trade for Duchene that doesn’t involve Colorado retaining some salary from Duchene and taking on some salary from Boston’s books. You’re probably going to call me crazy but Spooner AND Brandon Carlo, plus a draft pick for Duchene?

The Bruins have some depth at the blueline. Rob O’Gara and Jakub Zboril are young players who proved themselves this preseason and competed for a roster spot in the NHL. Either one of these two could likely replace Carlo in the lineup.
Carlo, while a solid defensive-defenseman, isn’t such a transcendent talent that he should be considered “untouchable.” Especially if he can be used to bring in a guy like Duchene who would probably flourish in Bruce Cassidy’s fast-paced system. Once again, with the Spooner and Carlo deal, Colorado would need to retain some salary, which appears to be a non-starter issue for them.

The Bruins also have organizational depth at center, and the likes of Sean Kuraly or Jakob Forsbacka Karlsson could slide in to replace Spooner as the 3rd line center. Our top-6 at that point with Duchene in would be arguably one of the most dangerous lines in the NHL.

It’s the most talked about trade that hasn’t even happened.

While Duchene was on the block all of last season, he started this season once again a member of the Avalanche. At the start of camp he said that he was simply there to “honor his contract”.

At the beginning of the season there was so many questions whether Duchene would even start the season with the Avs, well he did, now let’s see if he finishes this month with them.