With Gronk back on his game, Brady is simply the best 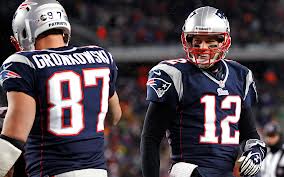 With ESPN declaring Tom Brady as the NFL’s first half MVP – thus making an already silly award even sillier – earlier this week, one question should stand above all others in regards to the quintessential QB’s bounce back performance last month after a slow start to the season.

Is it any surprise that Brady’s level of play has gone through the roof at the same time Rob Gronkowski has become the beast that no one in the league has an answer for defensively once again?

The only answer available is, of course not.

Only football neophytes would argue otherwise and for those who were critical of the weapons Brady was given to start the season on offense – guilty as charged – the re-emergence of Gronk has us all re-evaluating our remarks when it comes to the aging quarterback’s arsenal.

Before we get to Brady, let’s make one thing perfectly clear.  There never has been and most likely never will be an offensive weapon like Gronkowski.  The combination of speed, power, size and strength are unprecedented in the history of the National Football League.  Gronk would make any quarterback look good, but his return to health has made Brady look great again.

In the late ‘70’s Howard Cosell once famously deemed the former Pats great Russ Francis to be an “All World” tight end.  If the great game caller were alive today, he no doubt would deem Gronk an “All Universe” option at Brady’s disposal.

Looking back on the first two months of the season, it is clear to see that the trajectory of the Pats success mirrors the return to full health of the brawny beast that send shivers down the spine of opposing defenses and tosses defensive backs around like he is throwing a frisbee.  During weeks 1 through 4, Gronkowski averaged 35 offensive snaps per game resulting 3.25 catches per contest and yet somehow still managed to score 3 touchdowns in his clearly less than stellar state.

In the 5 games since the ugly loss against the Kansas City Chiefs in week 4, that number jumps to 58.4 plays per game, and if you remove the blowout win against the Chicago Bears that saw Bill Belichick shelve his sick not-so-secret weapon due to “dehydration” in which Gronk only saw 39 snaps, the number now becomes 63.25 plays/game.

It’s not like anyone is breaking any new ground by saying that having a healthy Rob Gronkowski on the field makes everybody – especially Brady – better, but if you had any doubts about whether or not he could be the same type of game changer again after having his knee blown up by T.J. Ward last season, they should be swept aside at least for now.

And while having an offensive line that can consistently block for Brady longer than it takes to catch a shotgun snap is a very close second, having Gronk back to being Gronk has done more to make TB12 look great again than any other development for the Patriots offense since the doldrums that were the September swoon switched to the renaissance that was a series of October/November routs.

Gronk’s return to dominance has made once marginal players like Brandon LaFell a real concern for opposing defenses while opening up space for the dynamic Julian Edelman to operate.

Over and over again Brady has shown that he can do more with less than any other quarterback perhaps in the history of the NFL.  Countless times he has carried a not so talented offense further than it ever should have gone, including last season to the AFC Championship game and in 2006 when he was one half/one flu bug away from taking the likes of Reche Caldwell to the Super Bowl in Indianapolis against the Peyton Manning led Colts.

Never since Tom Brady became Tom Freaking Brady over a decade ago has his ability to make chicken salad out of chicken bleep been questioned until this past September, when the team was struggling and the Hall of Fame to be QB looked to be lost at times.  While there were some that even before the season began like Pro Football Focus’s Sam Monson (What’s an Irish guy know about football anyway?) claimed that Brady was “slipping”, most believed that Tom Terrific’s difficulties were directly related to the lack of viable targets provided for him by Belichick.

Now that all the king’s horses and all the king’s men seem to have put Gronkowski together again, Brady and the offense are hitting their stride and look as if the talk of a Super Bowl run that was so widely discussed entering the season doesn’t seem like the silly talk it did just a little over a month ago.

In fact after dismissing Manning and the Denver Broncos last Sunday, it is those who questioned the dynamic duo of Brady and Gronkowski’s ability to get this offense in gear that are looking silly now.

It is amazing what a difference a month makes.  While Tom Brady took AFC offensive player of the month for his other worldly performance in October and now has the talking heads claiming he is the league’s most valuable player, it is the return to form of Rob Gronkowski that has the Patriots offensive running on all cylinders.

If this is the offense the Patriots will have entering the playoffs in January they no doubt will be among the favorites to win another Lombardi Trophy.  If Gronk is Gronk from now until the first Sunday in February, Brady and the Pats offense will be as close to unstoppable as you can get.

In football as in life, good health is everything.  While it is often said that nothing in life is certain except death and taxes, you can rest assured that when he is healthy, Rob Gronkowski is the best football player on the planet.  Just ask Tom Brady.