Will Ainge and the Celtics extend Smart before Monday nite ?

While excitement swirls around the Celtics amidst a promising undefeated preseason and a highly anticipated season opener against Cleveland on Tuesday night, an under the radar topic that looms is a decision that the team and Marcus Smart are facing – they must reach a contract extension by Monday, or he’ll be a restricted free agent next summer.

In terms of what to expect here, conventional wisdom tells us almost nothing. In past seasons, we’ve seen Danny Ainge take a pass on addressing soon to expire contracts and allow things to play out in the open market when the time comes – think Kelly Olynyk as a most recent example. This approach was ideal strategically in the times building up to now, as maintaining salary flexibility was core the team’s ability to chase and snag big fish in the free agent market. Plus, it was far from cryptic this past summer that Ainge did not see a team that could contend for a title and saw an opportune time to capitalize and become the first ever regular season conference champion to intentionally rebuild. All this, in addition to the model of inconsistency and underperformance that Smart has been through his first 3 seasons, would seemingly make him an easy candidate to also kick the can down the road on until next summer. 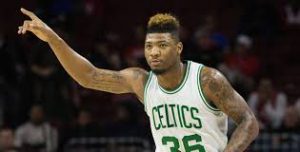 That said, there are several meaningful factors working in favor of a contract extension here. First and foremost, Smart has come into camp and preseason trimmed down 20 pounds from last season. The impact is evident in his shooting, explosion to the hoop and confidence. While we’ve heard this story before in Jared Sullinger, we haven’t actually seen it. Smart is doing it, at least thus far. Brad Stevens is also a huge supporter of his, and Marcus always appears genuine in his selfless appreciation for the culture of the team, while his leadership also emerges in a very evident way with the overhaul that took place this past summer, leaving gaps in the hierarchy of the team. Lastly, just think about all the trades that have occurred, let alone those that were rumored and never came to fruition. We know Smart’s name likely came up in all of those discussions and yet, after all of the glorified players that have been mercilessly discarded, he remains. There is something this team loves about him both in the short and long-term and even if it was always based more so upon potential than actual results, the evidence is there that this season could be a different story.

The gamble is an interesting one – do you reward the apparent changes and potential and leap now, or do you wait it out and see how he plays, figuring that he either isn’t worth to other teams what he is to yours, or will not sustain the level of play throughout this season that his current contract asks likely call for? Gary Harris, a nice player by all accounts for the Denver Nuggets and one in a similar position to Smart’s, was just extended for 4 years at $84 million. This is likely to color Smart’s thinking over these next few days.

Whereas maintaining salary cap flexibility was of paramount importance to the Celtics in past years and made them reluctant to commit to players not likely to deliver at a level reflective of what their league market value would demand, the landscape has shifted. The team is over the cap and will be for the foreseeable future, with roughly 80% of its salary tied up in players it wanted to get and did not stumble upon – Al Horford, Gordon Hayward and Kyrie Irving.

Not bringing back Smart, or nickel and diming him in salary negotiations, does little to expand the team’s ability to bring in more high-level players. They can’t go sign a major free agent, even without his current salary on the books. What they do have working in their favor is his Bird Rights, an exception which allows you to eclipse (or continue to eclipse) the salary cap while paying your own players, provided they’ve been around for 3 years. In other words, they certainly do not lament the financial situation they’re in. They arrived here by design and the building blocks seem to be in place to retain a core contributor like Marcus.

Another topic that must be appreciated within all this is the theorized pursuit of yet another major piece, such as an Anthony Davis. If you’ve bothered to try to dream up a Davis trade in the past few months, you’ve realized that even if you’re okay giving up every conceivable future draft pick, it’s also impossible to avoid gouging the team from a talent standpoint and even a pure volume standpoint. Assuming the three big names mentioned above do not move in such a trade, nobody else on the team even makes $6 million per year. You’re okay trading Jayson Tatum and Jaylen Brown on top of all the draft picks? Okay, that’s bold and I respect it, but you’ve still only constituted about half of the required outgoing salary at that point in order to bring back a salary such as Davis’. While extending Smart certainly means more money spent and potentially incurring the luxury tax penalty imposed by the league, it also likely means having at least one salary in hand on the team that could chip away a large chunk of the value needed to bring back a star in a potential future trade. Smart, player X and a handful of picks is heck of a lot more palatable and practical than players A, B, C, D, E, F, G, X and a handful of picks.

The outcome of this will be interesting and regardless of what occurs, we can still bank on two certainties – 1) it will tell us very little about what the future actually holds…the uncertainty and fun associated with it will continue, and 2) Smart is going to play his butt off either way.