Ty Law to serve as Honorary Captain on Sunday 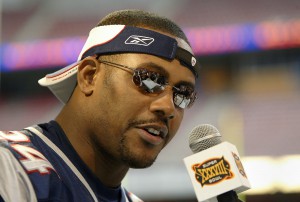 FOXBOROUGH, Mass. – When the New England Patriots take the field in Denver for Sunday’s AFC Championship Game (3:05 p.m. ET/1:05 p.m. MT kickoff, CBS), they will have one of the franchise’s most entertaining and clutch performers in their corner, as three-time Super Bowl Champion and Patriots Hall of Famer Ty Law will serve as the team’s honorary captain.

Earlier this week, Law, who throughout his career was at his best on the NFL’s biggest stages, accepted Patriots Chairman and CEO Robert Kraft’s invitation to serve as the team’s honorary captain – a role he has served three times, and twice since being inducted into the Patriots Hall of Fame in 2014.

“It is a tremendous honor to play in our fifth straight AFC Championship Game and 12th conference title game overall,” said Kraft. “Ty Law has been a part of so many big playoff moments for our franchise over the years and I am so glad he can join us once again for Sunday’s AFC Championship Game in Denver.”