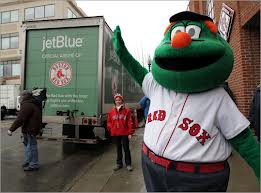 Saturday is what has become to be known as Truck Day at Fenway Park, the day when the team’s gear is loaded onto the back of an 18 wheeler to begin the journey to Fort Myers for the start of spring training.  While the practice – in some form or another – has taken place since the franchise was founded in 1901, the pomp and circumstance surrounding it began to take shape in 2002 under the watch of none other than Dr. Charles Steinberg, aka the man behind the pink hats.

I confess, I have always ridiculed the event and have seen it as just another contrived occurrence fostered by the ownership’s philosophy of “if its not nailed down its for sale” (unless, of course it is the 2004 Fenway turf, in that case they will dig it up and box it for you for a price).

Not anymore.  Not after this long and brutal winter that seemingly has been so cold so long I am pretty sure it has been since the end of October that I have actually had feeling in my toes.  Not after having to stare at those hideous mounds of sand, salt and snow that line every road, who with their bleak gray appearance constantly reminds me of just how long the shortest month of the year, February, can be in New England.

If the Fonz could say it (http://www.youtube.com/watch?v=uwkU8-d1gIk), then so can I.  I was wrr, I was wrrrr, I was not exactly right.

I am a changed man, as far as I am concerned Truck Day cannot get here fast enough.  Start the parade and get that puppy loaded, gassed up and headed south on I-95 as soon as possible.  Heck, I will even wear the Wally the Green Monster costume at the festivities if need be.  Just get a move on already.

I have seen the light and now concede that those who have gathered on Yawkey Way to see the big rig off on its journey south all these years were right all along.  From this day forward, I will celebrate truck day as the unofficial start of spring even if I have to do so in my long underwear and North Face jacket with a scarf covering my freezing face.  I will herald it as the first sign that the long cold slumber of winter is nearly over and I will look forward to it the same way I look forward to spotting the first emerging buds on the barren trees.

You know, there is actually something very liberating that occurs when you embrace your inner pink hat that is both part release and part revelation.  I may actually start a petition to make Truck Day a state holiday in the future, kind of like Evacuation Day but with less political hacks and more pink hats.

I have actually come up with a slogan for it, “Truck Day, it’s not just for the pink hats anymore!”  On second thought, maybe I should ask Dr. Charles for some help.

Now if I could only find my copy of “Sweet Caroline” so I could bone up on my, “So good, so good, so good!”  Good lord, what did I just say?  This winter really has to come to an end soon…