Pittsburgh Steelers coach Mike Tomlin has been fined $100,000 for his actions on the sideline during a kickreturn in Thanksgiving night’s game against the Baltimore Ravens, the NFL announced Wednesday morning. Furthermore, the league said, the Steelers are subject to “a modification or forfeiture of draft choices … after the final order of the 2014 draft has been determined.” 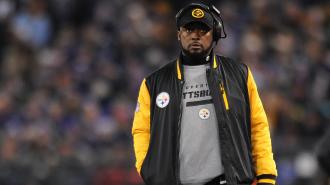 of the Bounty-gate ruling.  On Jacoby Jones‘ third-quarter kick return, the NFL said, Tomlin was in the restricted white area beyond the sideline and “stepped foot onto the playing field during the play,” in violation of NFL rule 13, section 1, article 4. “As I stated yesterday, I take full responsibility for my actions, and I apologize for causing negative attention to the Pittsburgh Steelers organization,” Tomlin said in a statement released through the Steelers. “I accept the penalty that I received. I will no longer address this issue as I am preparing for an important game this Sunday against the Miami Dolphins.” The Tomlin punishment was handed down by NFL executive vice president of football operations Ray Anderson.

The announcement also officially acknowledged that Tomlin should have been penalized by game officials for unsportsmanlike conduct. On Tuesday night, league vice president of officiating Dean Blandino told the NFL Network that officials “should have flagged Tomlin” and that the mistake “has been addressed with our staff.”