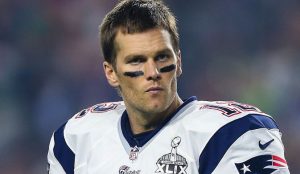 Q: What have you learned about the way that you can use Rob Gronkowski and Martellus Bennett together that you weren’t able to figure out during the summer?

TB: I thought we figured out a lot during the summer. It was really seeing what Martellus [Bennett] was able to do over the course of the time that he was out there. Gronk [Rob Gronkowski] wasn’t out there as much, but I think everybody developed a lot of confidence in his role and what he was capable of doing for us. It’s always challenging when a new player comes in and you’ve never really played with that guy, so just to see what he’s been able to do has been so much productivity to the team, and he’s added so much. It’s going to be a big week for him, so I’m glad he’s on our team.
Q: Can you speak to your own decision making as well as to that of Jacoby Brissett and Jimmy Garoppolo that’s led to all three quarterbacks not throwing a single interception through the first eight games of the season?
TB: Yeah, that’s been a real, I think strong point for our team and I think that’s been a product of a lot of things. I think interceptions are – sometimes it comes down to quarterback decision making, it comes down to protection in the pocket, it comes down to what the scoreboard looks like. If you’re down 14 points in the fourth quarter, that risk-reward scenario that I talk about a lot changes in your mind and you’ve got to start trying to make tighter throws. We’ve played with a lot of leads which has been very helpful, but yeah, this week is all about turnovers for us. I know they preach that a lot. I know the coaches talk to us a lot about Coach [Pete] Carroll’s philosophy and saying, ‘It’s all about the ball, it’s all about the ball.’ They really thrive with turnovers. It’s a really turnover-driven defense. They’ve got a lot of playmakers at a lot of levels to get the ball off the quarterback, get the ball off the running backs, so it’ s going to be a big challenge for us.
Q: What makes the Seattle defense so difficult to play against player-wise and scheme-wise?
TB: I’ve always, I’ve told you guys a lot over the years, some of the best defenses I’ve played in my whole career, they just do what they do and they do it at an extremely high level. This is one of those teams. They’ve led the team in scoring I think over the last four years, giving up the fewest amount of points. I wouldn’t say they’re going to run every defense in the book. I think it’s a relatively aggressive plan that they have. I think they all know what they’re responsible for and they all do a great job defending. It’s a very sound defense. They don’t give up anything and that’s why you can play that style. There are no voids in zones; there are no voids in the running game. It’s hard to throw the ball on these guys. I think they all play pretty aggressively. Coach [Bill Belichick] says, if you love football, Sunday night here at this stadium is going to be a great place for it.
Q: How good was their defensive scheme in Super Bowl XLIX and have you watched that game over again?
TB: Yeah, definitely. I’ve watched it a couple times, and I’ll watch as much as I can over the course of the week to try to – so I can play with anticipation; get to know their players and know their scheme. Sometimes, when you play in those Super Bowls, you’ve got two weeks to prepare, and I would say I watched more film that week than I’ve watched in my entire career. But you still have to go through that process this week and it’s good to have some familiarity with them. We practiced yesterday; we got off to a good start. We’ve got to keep it going over the course of this week, but it’s a big challenge for our team and hopefully we’re able to really meet the challenge.

Q: Why did you give Donald Trump permission to talk about your political preferences at his rally in New Hampshire Monday night?
TB: Why did I give him permission? So you’re assuming I gave people permission?
Q: Did you not give Donald Trump permission to talk about your political preferences?
TB: I’m just going to talk about football this week.
Q: What can you do to make sure this presidential election isn’t as polarizing in your locker room as it has been overall across the nation?
TB: I think you have a lot of respect for the guys, and I certainly do, I always have for everybody in our locker room. We’re all on the same team, we’re all from different places, different backgrounds, different ages, races, ethnicities, beliefs, but when you come in a locker room, you’re all trying to, I guess put whatever feelings you have about anything aside to try to accomplish a common goal. I think we talk a lot about distractions because that takes away your focus from what those goals may be, but we have a very close locker room and it needs to be that way. Some of the best teams I’ve ever been around have the closest locker rooms.
Qt for fact-checking purposes, you did support Donald Trump, right?:
TB: Yeah, I talked to my wife; she said I can’t talk about politics anymore, so I think that’s a good decision made for our family.
Q: Was permission not given for your political preferences to be made public?
TB: Yeah, you know, I just want to focus on Seattle. At the end of the day, I don’t –
Q: It’s just about giving you the chance to say –
TB: Yeah, sure, I mean I have a lot of relationships with a lot of people and I don’t think a lot of people are entitled to what my conversations are with friends of mine or people that I may speak with.
Q: At the end of the Seattle game in Super Bowl XLIX you let out a loud shriek when Malcolm Butler made the interception. Did you do the same thing last night when the election results were announced?
TB: I was asleep. I was getting ready for this week. This is a big week for me and our team so I was asleep.
Q: Can we get your reaction to the results just in general as a New Englander?
TB: I just think I’m always, I think a very positive person, so I think these are certain times for our country where there’s always change and transition and it happens, obviously with the presidents every four years or so. I think I’m always happy when people experience success. I was happy when President [Bill] Clinton won, I was happy when Barack Obama won twice, when President [George W.] Bush – I think it’s all competition. I was happy when the Cubs won even though I was not a Cubs fan. I was happy when the Cavaliers won. I think just as an athlete, you realize that a lot of people put a lot of things into competition. When people go at it, you have respect for whatever outcomes there are. I think that’s one thing that’s been a hallmark of our team. We’ve never finished games and then blamed other people. You always give respect to your opponent and then try to do better the next time.
Q: Can you describe the support Donald Trump has had for this team as he’s been around quite a bit?
TB: Yeah, he’s been in our locker room for a long time, absolutely. He’s been to a lot of games over the years and been in our locker room a lot, certainly at some of our bigger games, even going up against the Jets and stuff like that. That was long before he was ever a politician, too. Like I said, you develop relationships with a lot of different people, and I’ve certainly come in contact with a lot of different people over the years. Some become your friends and you keep in touch with [them], and some you don’t.