Hello, this is my first foray into the Boston Sports Desk world. More than likely my last.

I’d like to give my view on the designated hitter in baseball. For a point of reference I saw Ted Williams play (pretty sure I’m the only one my age who wasn’t at his last game where he homered his last at bat). Went to the first All-Star game to end in a tie. 1961(Fenway Park 1-1)

The use of a DH (designated hitter) is the one startling contrast between the National and American league. Some of the points from each side are ; more hits, thus more runs. No need to pinch-hit for the pitcher, since he’s not batting. Older players would extend careers, assuming they could still hit. Games would be quicker with less managerial moves. This last one is what National league fans tend to brag about. For some reason they like to see a great pitchers duel end because one team put a man on second base thus requiring an attempt to drive him home. Not sure of how often this worked especially against a true ace, would guess less than 30%, and I’m being generous at that. 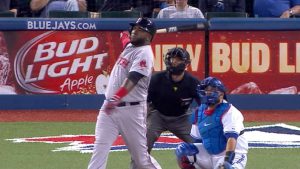 David Ortiz may be the best DH of all time

As far as a good hitting pitcher that’s an oxymoron like Civil War, Jumbo Shrimp, and Military Justice, to name a few. Since the best hitting pitcher is probably Bumgarner in San Francisco he has two home runs and is around 180 BA so I ask is their a position player on the Giants given the same at bats as him who wouldn’t achieve these lofty figures, especially with more at bats? After all he would bat every day or rotate with other position players and rest from the grind of playing the field everyday while keeping decent bats in the order.

Another theory from the Nationals is you have to carry a dead weight player who can’t field. How many of these teams have their always available switch-hitters? Not to mention when they substitute for the pitcher they use the old double switch-aroony (may not be exact term) By doing this they have to take out a starters bat and put in non-starter sure he may or may not be better defensively but he bats in ninth spot (pitchers) and pitcher goes to removed players spot. These newly entered relief pitchers are even worse hitters than the starters as they rarely bat more than once a game.

Another by-product of letting pitchers bat is you get those extra strike outs on your pitchers line. Useful when negotiating something, like contract, or Hall of Fame installation. I’d like to know how many times the pitchers spot in the National league struck out (while you’re at it how about looking versus swinging?) Now let me know the strike out ratio of the DH. Of course he was still facing the Ace of the staff who doesn’t get pulled for a chance to score. While we’re at it, let’s see how many times the pitcher sacrificed himself by bunting, just a way to take strike outs from pitcher, and put outs from catcher and give it to first baseman usually, unless he can’t bunt either and fails miserably. Or actually reaches base.

When the DH started all the teams had true hitters who fielded slightly better than me. Now few use this resource, I feel they are salary conscious moves. Ask the Red Sox how the DH has worked for them through the years? Even when playing in National league parks they used him in the field and were never embarrassed. More than I can say for his pitchers attempting to hit for first time in months, you just know a bunt is coming, or worse, a switch-aroo of seismic proportion, causing fans of home teams to salivate over the brilliance of winning with an inferior line-up.

I like all type games usually my team blowing out an opponent, close pitchers duel, or two evenly matched teams going to the end with their best. Best being the operative word, not someone needing to pinch hit for the third time this series, or someone who came in when pitcher was replaced and lineup was against him. Thus taking place of a true hitter and starter.

Before the DH rule the Twins had a batting champion named Tony Oliva on his last legs figureatively. Not wanting to hold him for pinch-hitting, they batted him in the top three spots in away games guaranteeing he’d get up once at least. Then pinch run the actual defensive fielder.

When I started this diatribe I let you know I was over 65 years, just so you’d know I like good baseball over the old school “let it be.” The DH has had a profound effect on numerous games and most in a good way. Hope you enjoyed this, I enjoyed venting.