Time for Brady & the Pats to kick the can against Oakland 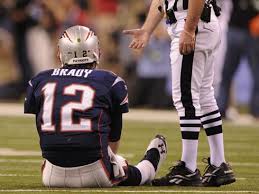 The schedule makers couldn’t have been any kinder to Tom Brady and his struggling offense as the once proud Oakland Raiders stumble into town on Sunday.  While it is true statistically that the Raiders have the second best defense against the pass in the league allowing only an average of 164.5 yards through the air this year, it is largely because they cannot stop anyone on the ground, ranking a league last 32 against the run while allowing 200 yards a game at a 5.0 yards per rushing attempt pace through the first 2 weeks of the season.

That running stat is so glaring that even Pats’ offensive coordinator Josh McDaniels can’t ignore it.  The fact is that as bad as the Oakland defense has been against the run, TB12 and his group of no name receivers (Gronk doesn’t count, he is a tight end and still has yet to prove he is Gronk again.) who have been dismal so far this season, need to get on track against the Raiders this Sunday.

(BTW, anyone else blowup their fantasy football draft and take Brady with their first pick?  I didn’t think so.)

Brady and the offense have combined to average only 184 yards per game throwing the ball, which ranks a lowly 27th overall in the league.  To date so far this season, if you line up at the receiver position for the Patriots and your jersey does not have the number 11 on it, you are pretty much guaranteed not to see the football.

The quarterback of whom it was so famously said that his “favorite receiver was the open receiver”, has developed such a severe case of tunnel vision that it has narrowed the upside of the offense tremendously.  Given the fact that the offensive line has been so porous that the Pats have had to add a 6th lineman just so Brady can remain upright long enough to get rid of the ball, there were numerous times against the Vikings last week that there were only 2 receivers running routs for him to choose from anyway.

The longer the line struggles to protect Brady only leads to further questioning of why Bill Belichick was so compelled to use a second round pick on his quarterback of the future while his future hall of fame quarterback is getting pounded on a weekly basis?  There is no doubt that Brady and the Pats offense would have been better served by adding a big body upfront so the selective slinger could have the time to look for someone other the Julien Edelman and Rob Gronkowski when he goes back to pass.

Regardless of the outcome on Sunday – barring an upset of epic proportions by the team in silver and black – not much will be learned about what the Patriots really are for another month or so when the schedule gets tougher and the calendar flips from October to November.  Beginning week 8 the Pats face teams that expect to be in the hunt for the playoffs in the Chicago Bears, Indianapolis Colts, Detroit Lions and the Green Bay Packers in a stretch of games that pretty much could define their season and decide whether they really are contenders for a championship, or they are destine to go home losers of their last game of the season for the 10th year in a row.

But for now the NFL schedule makers have thrown Bill Belichick and Tom Brady a bone in the form of an awful Raiders team, a tomato can in the words of the immortal yet indignant Dan Shaughnessey.  It is games like this that should build confidence in what has been an unimpressive offense so far this season.  It is time for TB12 and the hooded one to go into the way back machine and run up the score against a team that might have already quit on their coach.

And while it may seem silly to say that their season could be impacted by an early season game against an inferior opponent, this team is in great need of a tire pumping win on the offensive side of the ball.  If Brady and the offense can’t puff out their chests after the game on Sunday, they may not get another chance to do so as their schedule gets more difficult.

And if the play in front of Brady doesn’t improve, the next time an opposing defensive lineman takes him to the ground for a sack knocking the air from his lungs, the winds in the sails of the Patriots chances this season might just escape right along with it.

Kevin Flanagan is a Boston Sports Desk Correspondent.  He can be reached at Bsdkevinflanagan@yahoo.com or via Twitter @KevinMFlanagan