Thirty Seconds to Mars Launches Forth Into the Deep

Waiting for the show to begin was like waiting for a rocket to launch – the foreboding structure hovers over the front of the stage with obvious readiness to ignite. But there’s a tangible hesitation that sits in the air like a thick, electric fog. Questions floated through my mind as the heavy bass beat rattled my core. Was the band going to emerge from the grand, rectangular box that I was convinced was previously just a screen? Maybe. Would they appear with a grand flourish, or surprise us all with a soft entry? No, of course not – this is an alternative rock band, with prog styles mixed with “space rock”, as I’ve seen the term used, likely due to its synthesized essences mixed with hypnotic beats and impulses. Soaked in the sounds of the future and born from the sounds of the past, Thirty Seconds to Mars is an exuberant foray into the changes of time and the way humans perceive it.

After a small eternity of waiting for the bass to give way to a melody, the rectangular structure finally began its ascent up to the rafters as frontman Jared Leto (also known for his role as the psychopathic Joker in Suicide Squad) began to give way to the opening song of what has been dubbed “The Monolith Tour” in support of the band’s fifth studio album America. Opening acts before him included the bands Joywave, Misterwives, and Walk the Moon – all offering their own brand of poppy, electrified, high-octane music – which seemed to be quite fitting both thematically and sonically with the vibe and energy that Thirty Seconds to Mars touts with a full-bodied gusto that must be witnessed in person to be believed.

That being said, I was quite impressed with the way that Leto’s voice in person sounded exactly like the recorded versions of his songs that I have heard. Live performances are a special kind of entity that are fabulous to watch, but sometimes cannot quite live up to the hype of a digitally polished piece of music. In this case, it absolutely did – Leto is talented on many levels, and commanded the crowd with an exuberant, all-encompassing excitement. Running around the stage holding an American flag while wearing a flowing robe, often spinning around amidst the strobe lights and moving screen panels, he himself is a spectacle every bit as much as his music. His brother and drummer, Shannon Leto, provided a stable, constant, and strong beat the entire time, often serving up complex drum fills at the most opportune moments. 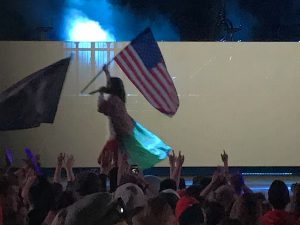 Jared and Shannon were the only two band members visible on the stage for the majority of the show, until they brought their guitarist, Stevie Aiello (taking the place of former lead guitarist Tomo Millečević, who reportedly is taking some time away from touring) onto the stage to thank him for playing. I found it quite odd that neither the guitarist nor a bass player were visible really at all during the show, but clearly the band has their own style and isn’t afraid to shatter expectations – which I absolutely respect. As I myself am a guitarist, I always appreciate a chance to watch the pros, but getting to at least hear them was still quite enjoyable.

Being fairly new to the Thirty Seconds to Mars scene, I myself am most familiar with the more radio-popularized songs, such as “Walk on Water”, “Dangerous Night”, and the stadium-sized sonic experience that is “Kings and Queens”, but of the songs I heard for the first time at the show – the powerful rock ballads “Do Or Die” and “Up in the Air” – definitely caught my interest, as did the emotion-filled, more mellow selection “The Kill (Bury Me)”. The latter of which sounded familiar, as if I had heard it on the radio before. I was amused to see that the band also covered Rihanna’s hit song “Stay”, as I never would have guessed that it would be a stylistic fit for them, but it truly was. Seeing Jared standing precariously on a panel of the aforementioned box-turned-platform, hovering over his drumming brother below him, the blue tones of the ambience mixed with the profoundly tantalizing tone of Leto’s voice for a truly magical moment. I truly enjoyed the thematic elements of the stage and the way that they made use of every inch of it. Even though it was exceedingly smaller than a stadium stage would be, their showmanship is miles long and deep. This is quite apt, considering that the motto of the band is the latin phrase “Provehito in Altum” which may be translated as “Launch forth into the deep”.

Jared even routinely asked members of the audience to join him onstage, both to help hype the crowd, as well as to provide some background dancing and just a generally energetic party scene. But my favorite moment of the audience participation was when a fan named Michael, who reportedly won a contest, was invited to play guitar with the Leto brothers for a song, which must have been nothing sort of surreal. The guitar geek in me immediately identified the guitar he was playing as a very snazzy white PRS model, and I’m not going to pretend like I wasn’t drooling over that alone. 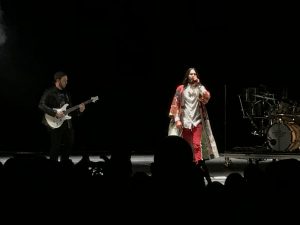 All in all, the Monolith Tour was everything I was expecting and more. The driving beats and nearly hypnotic style of both Leto’s voice and the accompanying sonic elements is a fabulous escape from the stresses and struggles of everyday life. Having orginally noticed the band from the small sample of songs I had heard on alternative radio, and then getting to see them live was an experience that I would recommend to anyone who enjoys high octane alternative rock music. The show featured a very measured and intelligent mix of sound layers, not so unlike the emo rock band My Chemical Romance of the 2000s who paved the way for acts like this – even if the eyeliner and skin-tight leather pants have been swapped out for a beard and a flowing robe. 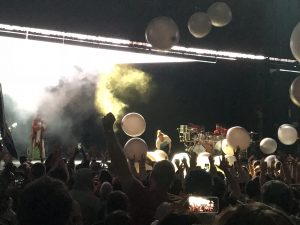