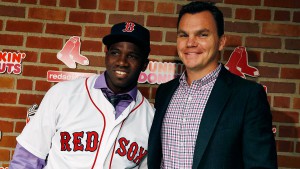 The mediocre – and that is being generous – start for your Boston Red Sox cannot really be classified as a surprise to anyone who took a good look at the roster general manager Ben Cherington assembled in the off season. Built more like a fantasy team than an actual contender – where the value is placed on offense, and pitching and defense are virtual afterthoughts – it is not a surprise that they have played like the “throw it against the wall and see what sticks” group that they actually are.

Pretty much anyone who knew anything about baseball was left with their jaws hanging wide open when the Red Sox were listed as favorites – the well-known sports book Bovada had only four teams (The Los Angeles Dodgers, Washington Nationals, Los Angeles Angels, and St. Louis Cardinals) in MLB winning more games than the Sox entering the season – to win the American League East to start the season, and they were listed as 12-1 to win the World Series entering April. Of course reality set in after the three fifths of the starting rotation struggled to make it through three innings four of the first five turns through the rotation, and the bullpen was beat up more than a piñata full of candy at a five year old’s birthday party as a result.

And while the construction of the pitching staff will likely be a topic of conversation up until the trading deadline – assuming there is not a repeat of what has happened two of the last three years to the Olde Towne Team, and they are still viable come the last week of July – the curious case of Rusney Castillo remains one of the most head scratching moves made by the Sox GM.

Signed in August of last year and quickly dubbed the center fielder of the future, Castillo’s limited time with the Red Sox organization has been a bit of an enigma. Clearly talented and exciting when he is on the field – at times it has seemed as if “Rusney Castillo” was really the term used in Cuba for “cannot stay healthy” – the $72.5 million-dollar man has barely been seen with the big club. In what was likely a club driven oblique issue to start spring training in order to acquiesce to manager John Farrell’s desire to give veteran Shane Victorino every opportunity to be the everyday right fielder after Mookie Betts played his way into the spot thought to be Castillo’s last summer; the Sox slowed his progression to start spring training. Ever since then, it has been a medical speed bump, after speed bump, for Rusney to finally make it to Boston, and fill his once assumed spot on the big-league roster.

Now that the club has shown itself to be pretty much a lifeless bunch of miscast members of a middling team, wouldn’t the spark from what was supposed to be the Cuban version of Ron Gant last August, be exactly what Cherington’s team needs as he scrabbles to find starting pitching on the fly? On a roster that, quite frankly, is unlikable/disinteresting once you get past Dustin Pedroia, David Ortiz, and Pablo Sandoval, wouldn’t the injection of excitement that Castillo could bring to the team be just what this club is desperately in need of?

If not now, then when? Is the Punch and Judy bat, and just above adequate defense of Daniel Nava so valuable that the guy you signed for seven years, and $72.5 million should continue to toil in Pawtucket? Shouldn’t the Red Sox be the recipient of the production of the richest 27-year-old prospect in baseball – assuming he can stay upright for more than a week – than the PawSox?

Castillo – who hit his first two home runs of the year and drove in four last night in Pawtucket – is perhaps the most glaring piece of evidence of the haphazard way Ben Cherington went about building this ballclub. When his team was headed to their second last-place finish in three years last summer, he went and signed the shiniest bauble available, and now he has no place to hang it.

Instead of signing Jon Lester last year when he had the chance to do so at a discounted rate, or trading for a top-end arm in the off season, he overpaid for a broken-down Justin Masterson, and went to the discount rack for Wade Miley to build what has proven to be a below average starting staff.

It is not even Memorial Day yet, and the Red Sox are again teetering on the edge of obscurity. Inconsistencies on offense and the pitching staff are once again threatening to drive the fan base away before the Fourth of July.

Castillo may not be the answer the Red Sox need to cure all that ails them, but he might just be enough of a distraction to keep an ambivalent audience at least somewhat entertained.

It is becoming clear that Ben Cherington fell short in building the contender that so many in Red Sox Nation were hoping for after such a miserable winter. If the Sox GM still harbors hopes of turning the season around for his poorly put together club, the first move he should make is calling up Castillo.