The Oh Hellos, Family and Friends, and Cereus Bright filled Paradise Rock Club last week with the harmonious sounds of drums, guitars (not so odd, I know), banjos, the viola, tambourines (way cooler!!), and so many more. I think one of the best ways to be introduced to a band is with a live performance. For that very reason, I didn’t look much into either of the openers beforehand because I wanted a fresh, new experience there. I was not disappointed.

Cereus Bright–named for a flowering cactus that only blooms at night–put on one hell of a show. Singer, Tyler Anthony, explained the reference to the flower in that both it and the band bloom in unexpected places; they thrive in the most unlikely of circumstances. This analogy was the perfect kickoff of the show. After my school being hit by the stomach bug that week, I needed some hope to thrive in that setting.

I have never considered myself a fan of folk music. I would never say I dislike it, but you wouldn’t find anything of the sort in my most played lists. After this show, it is possible to see that change soon. Cereus Bright brought so much passion and enthusiasm that it is hard not to fall in love with folk. It listed my spirits higher than they had been all week. 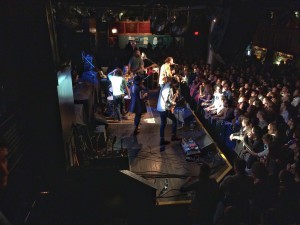 Family and Friends hales from Georgia and brought their own sort of Folk Rock to the show. I was worried the music would sound disconnected in trying to align 7 band members in each song. I am happy to say I was very wrong about this. Somehow, they made everything fit perfectly for a spectacular performance. Although the quality of their music live was wonderful, their stage presence alone was enough to keep me highly interested.

First I must express my shock that percussionists Jamie Rios and Ryan Houchens do not in fact seem to be related. From their connection and appearance, I was close to guessing they were twins (good thing I’m not a betting woman). Rios and Houchens kicked off the show by climbing on some amps and literally jumping into the first hit of the drums. The entertainment did not stop there though. In the final songs, while still playing, the two climbed up and over their drums sets–placed facing each other on stage–to switch places and sets!

I had the chance to speak to one of the vocalists, Melanie, after their performance. There aren’t words to describe how sweet and kind she was. Amazingly, I found her just standing on the balcony watching The Oh Hellos like everyone else in the crowd; the support between these bands should be a lesson to all others. 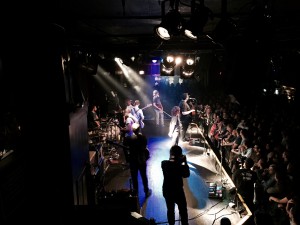 The Oh Hellos, an eclectic folk rock sibling duo (as described by their website), come to us all the way from Texas. Their set started off more mellow than the ones previous but it was a nice change of pace for a little while. Again, a much larger group with instruments not completely known to me, the band was able to create some incredibly diverse songs.

The Oh Hellos distributed the main vocals much more which added to the eclectic sound of each song. Although I have only been to Paradise Rock Club a few times before this show, I was shocked at the enthusiasm of the crown when the band came on stage. The first row must not have had voices the next day after their display of excitement. I can’t blame them though; if I wasn’t still getting over being sick I would have joined in right alongside them. I sometimes question the groupings of bands for a tour but this is definitely one not to be questioned. While all different, they came together to make one amazing show. Although the tour is almost over, everyone should make a solid attempt to catch them the next time around.

View all posts by: emilybroe