I have to honestly say that I went into the House of Blues with no idea as to what I would experience. The Darkness is an old school rock band from the UK that I was in no way prepared for on a low key Sunday evening. This concert was the end of their North American Tour, and they went out with a bang.

The band attracted a crowd that I was not used to. The Darkness was my first rock concert and even though I was one of the youngest people there, everyone was young at heart. The people around me were overly friendly and showed me the proper rock concert etiquette…basically just don’t stand still! The crowd was a bit smaller than the previous concert I was at in the House of Blues, but not rightly so. The Darkness is an underrated band in the younger generation and those who enjoy a good rock song, would really appreciate the band’s intensity and electric feel.

The opening act, however, I was not a big fan of. The music was good, but the band didn’t really connect with the audience as much as I would have liked them too. The bass sounded great and the songs were catchy, but it was hard to hear the lead singer. Her mic volume was too low and the drummer was speaking more than the lead singer, which is fine, but she was hidden in the back of the stage where not everyone could see her. This was also frustrating because when the lead singer introduced the band, I couldn’t even hear their name. Personally, I think a band as amazing as the Darkness deserves a better opener…but this band, with a little more practice, could put on a great show.

The opening act left and the stage was completely transformed. My favorite part was the back drop that was raised only minutes before The Darkness came on. The name of the band prominently hung behind the perfectly set up stage anticipating the craziness that was about to arise. The background music went hush and the crowd went wild. 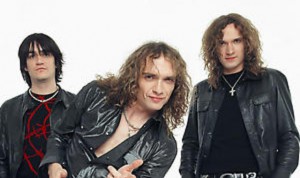 The stage was lit with dark blue lights and was covered in a mysterious cloud of smoke. This made the wait even harder to bare. Everyone’s eyes were wondering in hopes they would land on one of the band members peeking from side stage. But, there was nothing inconspicuous about this entrance. Justin Hawkins struts onstage with a striped, flashy suit with his name on the back of his jacket. He’s accompanied by band members Dan Hawkins (Justin’s brother), Frankie Poullain, and Rufus Taylor (who gave me one of his guitar picks!) They opened with one of my favorites, “Barbarian,” and I was shocked to see that the band sounded just as good live as they did through my headphones.

You can tell this band has been on many tours. They simply know how to put on a great show. The energy never left the stage. In between songs, Justin was either cracking jokes, or being his usual goofy self. The audience showed their love for the band nonstop. Everyone was constantly moving to the music and singing along (when they could keep up with Justin!)

Overall, it was a phenomenal show and the music, although not was I was used to, was a nice change. There is nothing like classic rock and roll and The Darkness proved that point for me.
All I can say is that North America was lucky to have The Darkness tour through and Boston will never be the same!