The Ballroom Thieves steal the show yet again

I must admit right off the bat that I’m partial to most things involving Stonehill, so a band featuring a fellow Skyhawk is a must see for me. And no my love for my school does not know any bounds. This was not my first time seeing the band as they have played many times at my school. It was my first time seeing The Bros. Landreth and You Won’t but i was very pleased with all of the performances.

I was surprised to find out the show was at the Royale in Boston because from everything I had heard it was a very active nightclub on the weekends. When I walked inside to a whole different world than the outside portrays, I understood. From statues of human forms and an antique-looking balcony that wraps around the entire room to the swanky furniture surrounding the main floor, the Royale is an experience in itself. 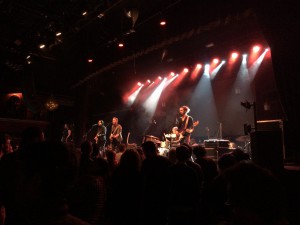 The Bros. Landreth at Royale Boston

The Bros. Landreth opened the show with so much soul that it really didn’t matter that I hadn’t known much of the music ahead of time. The bass player, Dave Landreth, seemed to pour all he had out through his bass that night. It was infectious the way he and the rest of the band kept the music with their head bobs and foot tapping. Now I know that doesn’t sound like much, but you’ll have to believe me on this one. They took full advantage of the time they were given; they weren’t overly interactive with the crowd but the performance still felt intimate and comfortable. 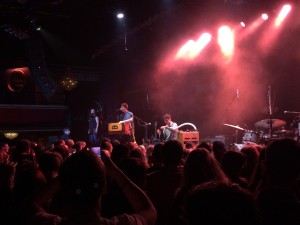 You Won’t at Royale Boston

You Won’t was a very big change of pace from the first band. I should have been able to guess this considering the lead singer, Josh Arnoudse, described the band’s defining features their “nasally voices and unusual instruments.” And when he said unusual, trust me he really meant it. The first instrument to come out looked like it could be the cousin of a kazoo or harmonica but attached to a head piece that percussionist Raky Sastri wore. We then met the very versatile instrument that started as a box with a flexible tube coming out of it which Arnoudse sang into but it was soon detached as he spun it around his head. This was followed by a saw which was somehow wobbled to make music. Last but not least was a sort of free standing accordion. Don’t get me wrong with any of these descriptions, I loved the ingenuity. I was amazed that these instruments (ones I probably wouldn’t have known to be instruments if I found them lying on the ground) could make such rhythmic and powerful music. 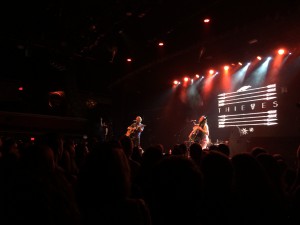 The Ballroom Thieves at Royale Boston

The Ballroom Thieves soon took the stage with more traditional musical instruments in hand. I had the chance to send some questions to the band before the show which gave me a good insight into them as individuals and as a whole. The biggest takeaway I had from the interview were Martin Earley’s words that mistakes aren’t as big of a deal as you might think they are. He talked about their growth as a band from playing on street corners to make rent to now playing almost 200 shows a year! The success they have seen thus far speaks volumes to Earley’s point that life really is what you make it. I couldn’t agree more. 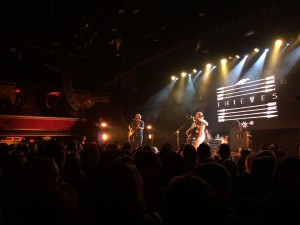 The Ballroom Thieves at Royale Boston

This was the first show of the roughly 15 I have been to this semester that I have run into at least 5 people I knew. I guess that’s what you get when The Ballroom Thieves play in Boston instead of on campus though. The support for the band from everyone in the crowd was incredible. Their new album “A Wolf in the Doorway” was released this year and I was pleased to hear much of the new music being played. Each song feels like a story that keeps you moving closer and closer to the edge of your seat. A week later and I still cannot get “Archers” out of my head. Don’t think for a second that is a complaint; I’m quite happy to have some quality music running through my mind over the repetitive junk that tends to fill the radio now. My only complaint about the show is that I couldn’t make my way through the crowd to the stage.

The Ballroom Thieves prove that your dreams are possible if you have the passion and perseverance like these amazing musicians do. And, if all else fails, we can follow Earley’s advice for success: “Set appropriate goals, and don’t stop working until they’re a reality. And then set new goals. Or just make a bunch of quick cash through some sort of ponzi scheme and retire at 24. That’d probably work pretty well, too.”

Great music, amazing personalities. This band couldn’t possibly get any better, but hopefully I’ll get to test that theory on their next time around.

View all posts by: emilybroe