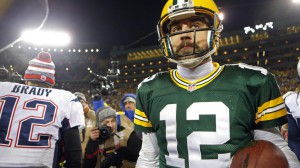 In what one can only hope was a column written with his tongue firmly implanted in his cheek, Boston.com’s Eric Wilbur contends that Patriots coach Bill Belichick refused to show his hand to head coach Mike McCarthy’s Green Bay Packers, instead he opted to take a loss instead of divulging his secrets so he could spring them on him and his team when they meet – in what some seem to think is a fait accompli – in Glendale, Arizona for the Super Bowl this coming February.

If this were the third pre-season game taking place in balmy Green Bay (Does it ever get balmy in Green Bay?) I would buy it, but in a regular season game at the end of November when he knows that a loss could lead to losing home field advantage for the playoffs?  Never.

And while Wilbur most likely didn’t believe what he was writing, in listening to the bastion of banality that is Boston sports radio, I am afraid there are those who call Patriots Nation home that actually did.

Hello?  This just in, that Aaron Rodgers guy is pretty good.

The reason the Patriots lost last night was not due to any type of secrets Belichick and his coaching staff were trying to keep, it was because the Pats defense had no answer for Rodgers and his offense all night.  The reason they lost is because even though the New England defense did a great job – for the most part – of taking away his first and second options, Rodgers discount double-checked his way to the open receiver all night long.

And while talk of moral victories usually leads me to – as the great Bill Parcells once said – throw up in my mouth a little bit, the one thing Patriots fans should take away from yesterday’s game is that their team got punched in the mouth in the first quarter and came back to make it one hell of a fight.

When is the last time you could say that about your team?  2007, maybe?

The fact of the matter is that your team fell behind 13-0 in the first quarter in a building where teams go to die in the first half of football games and rallied back to make it a ballgame down the stretch.  In fact, if it weren’t for – of all people – Darrelle Revis getting beat by Jordy Nelson for a 45 yard touchdown at the end of the first half, the Pats would have only trailed by 2 at the break and may have likely done enough in the second half to come away with the victory.

While the Pats defense responded to hold the Packers to only 3 points in the second half, the truth is they couldn’t get a stop when they needed a stop.  Too often the good coverage by the secondary was not rewarded as the Pats struggled to get pressure on the quarterback, and Rodgers quite simply may be playing the position better than anyone in the league right now.

What has been missing from Patriots teams for some time now has been its championship heart, and that heart was clearly beating in Green Bay for all to see.  For too long now when this team was beaten up by a bully, they turtled and took their beating lying down.  The Baltimore Ravens did it to them a couple times at home in the playoffs over the last five years and the Denver Broncos did it to them in the AFC Championship game at Mile High last year.

Last night they showed that will fight anyone, anywhere.  And that is the secret Bill Belichick has been hoping his team would reveal for all to see for a while now.

Should they meet again in Glendale, you can bet your bottom dollar that Belichick and his staff with have something up their sleeve for McCarthy and his team.  But rest assured it won’t be anything he was hiding from him last night.

If you are silly enough to think any differently, make sure you say “hi” to Santa Clause for me when you see him in a few weeks.