Sunday Shavings: Sinking Bruins slipping out of the playoffs, Notes from Causeway St.

Bruins are below average 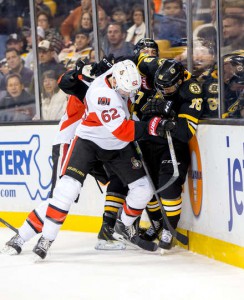 Bruins head coach Claude Julien summed it up perfectly when asked about what he thought about Saturday afternoon’s game against the Ottawa Senators that resulted in yet another loss with the B’s falling 3-2 in a shootout.  “Average”, the Bruins bench boss said.

With all due respect to the coach, average is being kind to say the least.  The fact of the matter is the Bruins are right now are well below average in goals scored per game, their 2.47 goals/game ranks 22nd in the league and defensively they aren’t much better, their 2.57 goal against per game ranks a pedestrian 14th in the NHL.

While the toadies will tell you that injuries are the main reason that the team is where it is right now – which currently seems to be on a road to nowhere – your eyeballs should tell you it is much more serious than that.  Even if healthy – which would mean center David Krejci returning to the line up on a regular basis, something that seems to be a pipe dream these days – they are still are a team without a top line that has had their identity, that of a physical team that can wear you down in the dirty areas of the ice and take advantage of mistakes in the offensive zone, stripped away by the salary cap mismanagement of general manager Peter Chiarelli that has “forced” him to let go or deal away core players like Johnny Boychuk, Jarome Iginla and Shawn Thornton in the offseason.

Milan Lucic – the mythical hero who has played like a zero this season – is seemingly lost without Krejci and even when/if the center returns to the line up and shakes off the rust of being sidelined for most of the season, there remains the gaping hole on the right wing of the B’s number one line that pales in comparison with other top lines of Stanley Cup contenders throughout the league.

The reigning Vezina Trophy winner, Tuukka Rask, currently ranks 23rd in the league in goals against average at 2.55 and a frightening 27th in save percentage at .911, while being paid more than any goaltender except Henrik Lundqvist at $7 million per season.  While the Bruins have seen a revolving door at times on defense this season, one would expect more from what was thought to be one of the best backstops in the league before the 2014-15 campaign began.  Winning games in which your team was outplayed is what top ‘tenders are paid the big money to do, and Rask simply hasn’t done that this season. 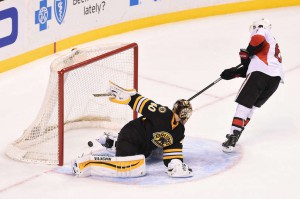 Perhaps the biggest concern for those in Bruins Nation should be the sudden drop off in level of play by perennial Selke Trophy candidate Patrice Bergeron.  Call it the curse of EA Sports if you will, but the bite that was in Bergeron’s game and his night in night out steady performance that resulted in a 30 goal season and a plus 38 last year, has been replaced with a up and down year that has seen his penalty minutes go up and his goal scoring go down.  Worst of all the normally reliable pivot man has been at times a liability in his own end to the tune of a 0 plus/minus rating, something that would have been just short of blasphemy if said in Boston just a year ago.

To add to the Bruins’ woes is the fact that in his two games back since returning from a knee injury in October the B’s captain Zdeno Chara has looked old and slow, so much in fact Julien kept him stapled to the bench in overtime yesterday against the Sens.  For a guy that the Bruins rely on to shoulder the load in Claude’s shutdown system, this is not a good sign for a team once thought to be the beasts of the East in the NHL.

The problems facing Chiarelli and the Bruins front office are substantial and their flexibility under the salary cap is minimal.  The team not only has to fill the sizeable hole created by Iginla and his 30 goals – not to mention his size and grit – taking the money and running to Colorado as a free agent, they also need to get bigger and stronger along the blue line.  Perhaps the only way for the B’s GM to do so would be to package an underperforming piece like Lucic, Loui Eriksson or Brad Marchand in the process, something the over the top in love with his own players Chiarelli would be hard pressed to do.

With yesterday’s loss the Bruins have now fallen out of the last playoff spot in the Eastern Conference with the Florida Panthers – the same Florida Panthers that draw friends and family only to home games but somehow saw the value of a Shawn Thornton in their locker room and line up that Chiarelli chose to ignore – leap frogging them in the standings and are now losers of 4 of their last 5 games.

It doesn’t take Chicken Little to see that the sky is falling and the team is showing very little indication that they know how to stop it from doing so.  Chiarelli needs to fix the error of his ways and soon, otherwise the Bruins – who once were favorites to win the Stanley Cup in the spring – will be on the outside looking in.

Straight from the folks at media relations on Causeway St.

PASTRNAK UPDATE: Bruins General Manager Peter Chiarelli announced December 12, that the Bruins will assign David Pastrnak to the Czech National Junior team for the upcoming World Junior tournament following the Providence Bruins game on December 20.
BOSTON BRUINS HOLIDAY TOY SHOPPING:  On Tuesday, December 16th, the Bruins’ wives, girlfriends and Bruins Alumni will participate in the Boston Bruins annual Holiday Toy Shopping event at Target in Everett, MA (1 Mystic View Road, Everett, MA 02149).  The toys will be purchased with money donated by the Bruins players and the Boston Bruins Foundation and will be delivered to hospitals around Boston and given as gifts to children who are unable to celebrate the holidays at home.  Bruins Hall of Famer Ray Bourque started the holiday toy shopping and delivery tradition when he was captain, and the event has continued through the years. Patrice Bergeron will spearhead the Bruins Toy Shopping and Delivery for the fifth year.  The hospitals receiving this year’s toy donations include Boston Children’s Hospital, Floating Hospital for Children at Tufts Medical Center, MassGeneral Hospital for Children, Shriners Hospital for Children, Franciscan Hospital for Children and Spaulding Rehabilitation Hospital.  The toy delivery will take place on Friday, December 20, with further details to be announced at a later date.  Storage and transportation of the toys will be provided by Gentle Giant.  For more information, please see the “Around Town” section of the Week Ahead.

TOYS FOR TOTS COLLECTION DRIVE:  The Boston Bruins will be collecting new, unwrapped toys for the U.S. Marines Corps Reserve “Toys for Tots” program at the following Bruins home games in December: Saturday, December 13 vs. Ottawa Senators; Sunday, December 21 vs. Buffalo Sabres; and Tuesday, December 23 vs. Nashville Predators.  Representatives from the U.S. Marine Corps Reserve will be on hand at the East and West turnstiles of TD Garden to collect toys and monetary donations. All toys will be distributed to less fortunate children in the community during the holidays. All monetary donations will be used to purchase additional toys.  For every toy donation or $10 donation, fans will receive a raffle ticket to be entered into a drawing for Bruins autographed memorabilia including a team-autographed jersey, team-autographed stick, and a player-autographed puck & photo. To learn more visit http://bruins.nhl.com/club/page.htm?id=58875.
BOSTON BRUINS FOUNDATION CONCERT: Join the Boston Bruins Foundation and a great lineup of live bands for a fun filled night of music and hockey, while raising funds for Toys for Tots! On Saturday, December 13, after the Bruins face off against the Ottawa Senators, come out to West End Johnnie’s to kickoff the holiday season and listen to great live music. Attendees will have the opportunity to participate in a raffle full of great prizes and are encouraged to bring toys to support the cause. Net proceeds from this event will benefit the Boston Bruins Foundation and Toys for Tots.  A limited number of VIP tickets are available which includes access to a private lounge as well as complimentary food for the evening. Stay tuned for surprise guest appearances as well! To purchase tickets, please visit: https://www.eventbrite.com/e/boston-bruins-foundation-benefit-show-tickets-13442971289