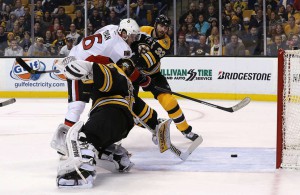 To say the natives are restless in Bruins country is an understatement, they are bordering on revolt.  While there are many reasons for the team tumbling from the consensus pick to be the team to play for the Cup out of the Eastern Conference entering the season, to being on the outside looking in come the New Year, let’s take a look at the two biggest areas of concern facing the faltering former front-runners.

The first, and most obvious, is the fact that their highest paid players have failed to perform.  Set aside for a second the injuries to David Krejci and Zdeno Chara if you will – health will always dictate a team’s success in any season – the performance turned in by goaltender Tuukka Rask and the once considered prototypical power forward in the game, Milan Lucic, thus far this season has been what could only be considered to be the worst bang for the buck in the NHL in 2014/15.  At the risk of beating a dead horse – both the woes of Lucic and Rask have been documented in this space already this season – this not so dynamic duo should be considered the poster-children for what ails the once big and bad Bruins.

In Rask’s case, the B’s had better hope that this is strictly a lack of focus on his part and not a glass ceiling that the once fabulous Finn has slammed his head against.  Owed a boatload of money – in only the second year of an 8 year, $56 million deal, with a full no-trade clause to boot – the franchise goalie has been that in name alone, failing to carry his team threw rough patches in the season, instead allowing a seemingly soft goal on a nightly basis.

Paying $7 million a year for a goaltender that is currently tied for 28th in save percentage in the league is a recipe for disaster, which is what this Bruins season will be if Rask continues to underperform the way he has the first half of the year.  If this is the best of what the B’s can expect from their backstop the rest of the season, the only title they can expect to claim in 2015 will be that of the biggest bust of the year.

Moving on to Lucic, if this season isn’t reason enough to convince even his staunchest 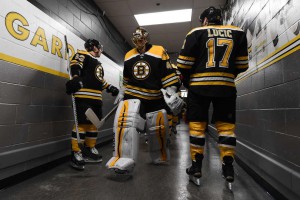 defender that general manager Peter Chiarelli should strongly consider moving on from the Serbian Slug, I’m not sure what will.  Unable or unwilling to engage on a nightly basis, Lucic has become a caricature of himself.  His childish antics after losing to the Montreal Canadiens in the playoffs last spring – which were only amplified when pretended to fly it up the flagpole heading into the penalty box at the Bell Centre in a Bruins loss earlier this season – and his crybaby reaction to being bloodied by Dalton Prout in a confrontation he initiated in Columbus in November, have served as fodder for the rest of the league, who can’t get enough of the one time tough guy making an ass out of himself.

The bottom line is unless Lucic plays like the snarling, snot blowing wrecking ball that he was during the last 10 minutes of the Monday Night Miracle in game 7 against the Toronto Maple Leafs in the 2013 playoffs, he brings little to a team.  He can’t score on a regular basis, he has straight line speed only, and he has such hands of stone with the puck that Roberto Duran is considering a trademark lawsuit.

The only silver lining regarding the Slug is that the Bruins are off the hook on his bloated $6 million a year contract after next season.  Chiarelli – if there are in fact any takers to be found – should move on from Milan before then if he can.

Speaking of the Bruins GM, he is perhaps the biggest reason the team is where it is right now.  Let’s face it, when it comes to managing the salary cap, Chiarelli has not only screwed the pooch, he has given it a reach around and a rimjob.  Quick to sign extensions with the players that were handed to him from the previous administration before they were due – Krejci, Lucic, Marchand, and Patrice Bergeron – and all to happy to ink fringe players he traded for during the team’s Cup run in ’11 – Gregory Campbell and Chris Kelly – Chiarelli now finds himself barely able to afford a $1 any size cup of Cumberland Farms coffee under the cap.

Again, at the risk of pounding dead ponies into the pavement, the B’s boss has cut the heart out of the team due – using his own chosen defense – to the team’s lack of funds.  The leadership that was lost when Shawn Thornton was kicked out the door to Florida at the end of last season, and the vacuum that was created when Johnny Boychuk was sent packing to the Islanders for the equivalent of a couple ears of corn and a sting of wampum, have sucked the life out of the Bruins since opening night.

The bungling of the big league roster has only shone a searing light on just how poor a job the GM has done when it comes to drafting players.  Save for the 18 year old David Pastrnak, who will be joining the team when they head to Pittsburgh for a game against the Penguins this Wednesday, the Bruins have nary a single prospect that can help shake them out of their current doldrums.

So bad is the state of affairs when it comes to players in Providence actually contributing to the big club any time soon, a week ago Chiarelli decided to put on waivers one of the pieces he got for Tyler Seguin (Matt Fraser) and called up Jordan Caron (he of 12 goals in 126 NHL games) in his place.  Fraser was of course claimed by the Edmonton Oilers, and Caron has since done what he has done best in his NHL career thus far, occupy a seat in the press level on a nightly basis.

Unless things change and quick, the Bruins are screwed.  Their coach and general manager have both recently signed extensions.  Their core – once considered to guarantee Stanley Cup contention for the foreseeable future – has developed stress fractures, and there is no room under the salary cap to add reinforcements.  And to add insult to injury, their general manager seems incapable of addressing the team’s needs via trade.

All totaled, the pieces the Bruins have in place seem to be a recipe for disaster.  While they most likely will continue to via for a playoff spot on a yearly basis, they are seemingly light years away from contending for a championship any time soon.  After all, isn’t that what team president Cam Neely in June of 2010?  Neely might have to slip back into Sea Bass mode and start kicking some ass on Causeway St. if the Bruins hope to get back to that level any time soon.