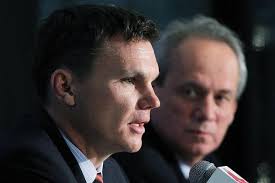 Now that the Tryptophan has warn off and the apple pies have been thoroughly devoured, it is time that Red Sox Nation turns up the heat on general manager Ben Cherington and the Boston brass and lets them know that there will be no excuse that will be acceptable for them not to re-sign Jon Lester.

Things have seemed to quiet down a bit on the Lester front from the buzz that was going on in cyber space Wednesday when reports indicated that the Sox were in the thick of it, when it came to returning the southpaw back to the friendly confines of Fenway Park.  I reached out to Jake Wesley – the fourteen year old phenom that is turning the stodgy baseball writer’s association on its ear and had the Hanley Ramirez signing before anyone else – via Twitter this afternoon and he confirmed that the St. Louis Cardinals are no longer in the mix and that the Sox offer of 6 years and $145 million is still on the table.

So what’s the hold up?  Why hasn’t Cherington been able to close the deal with what could be the most important piece the Red Sox lack if they truly think they can once again go worst to first in 2015, after a season that saw them fall out of contention weeks before the 4th of July last year?

Conspiracy theorist would say that Lester’s agents, the Levinson brothers, are waiting for the New York Yankees to do what the Yankees do, and slip in at the last minute and present them with an offer they cannot refuse.  That is all the more reason for Cherington to pull them to the table and get a deal done now.

Those very same conspiracy theorists would tell you that the Sox really don’t want to bring Lester back – for what reason(s) only they would know – and they are presenting the Levinson’s a package that they can refuse.

That, however, would seem to be highly unlikely now that they have gone to a 6th year and north of $140 million already.

The bottom line is the only way that Jon Lester should not end up in a Red Sox uniform again next year is because he was lying about his interest in coming back to the city he called home during the baseball season for the better part of the last 9 years.  Maybe he was just saying the right things all along – as he did when talks broke down after Larry Lucchino lowballed him in Spring Training with a 4 year, $70 million deal – and he harbors a resentment towards the team that he simply cannot overcome.

Maybe he wasn’t being truthful when he said he didn’t have to get the most money to pitch for the Olde Towne Team and at the end of the day, whoever paid the most would get the pitcher.  That most certainly would be the case if he chose the Bronx Bombers over the Red Sox.  (If you thought Johnny Damon was booed when he came back to Boston for the first time, just imagine how Lester would be treated if he came back wearing pinstripes.)

However, I find it hard to believe that Lester has been lying all along when he said he would welcome the chance to come back to Boston.  But I do think and idea of a “hometown discount” went the way of the printed newspaper when Lucchino insulted him last spring.

So the time has come to close, Ben.  Whatever obstacles are in the way must be overcome and overcome now.

Anything else will be unacceptable.