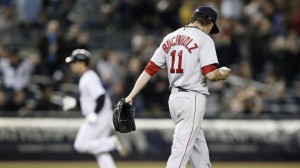 ROGER THAT: Clay Buchholz will make his 15th career start at Rogers Centre tonight…His 2.30 ERA here is the best ever among starters with at least 80.0 IP at this park…His 9 wins here are also the most as a visitor among active players, trailing only Andy Pettitte (17) and Mike Mussina (10) among visitors here all-time.
· David Ortiz has more doubles (32), home runs (37), and extra-base hits (69) at Rogers Centre than any other visitor in the park’s history.