Sox find a way to win Gm-1 despite the bullpen

·       Marked their first postseason game vs. NYY since erasing a 3-0 series deficit in the 2004 ALCS…Extended their postseason winning streak vs. NYY to 5 games.

·       Held the Yankees scoreless before being charged with 2 runs when a pair of inherited runners scored in the 6th.

·       Struck out Andrew McCutchen, Aaron Judge, and Giancarlo Stanton in the 1st inning.

·       Drove in 3+ runs in 17 different regular-season games this season, tied with Jesús Aguilar for the ML lead…No other hitter had more than 13 such games.

RICK PORCELLO (0.2 IP, H) recorded 2 outs in the 8th before turning the ball over to Craig Kimbrel. 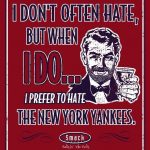 CRAIG KIMBREL (1.1 IP, H, ER, 3 SO) entered the game in the 8th inning and threw 1.1 innings of relief to earn his 2nd career postseason save.

ANDREW BENINTENDI (2-for-4, 2 R) recorded the first hit of the series with a single to the opposite field in the 1st inning.

·       Scored his 4th and 5th career postseason runs…Finished 6th in the AL with 103 runs scored this season.