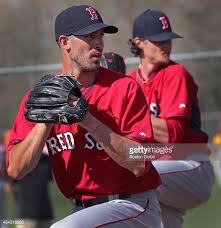 Anyone that grew up watching Red Sox baseball prior to the parting of the sea that was the 2004 World Series Championship season for the ages knows that no matter how good your team is offensively, if you can’t pitch, you can’t win in the playoffs.  Sure, you can win a lot of regular season games 7-6 or 9-8, but when the games that matter most get started in October, beer league softball lineups fall to the wayside in a hurry.

For 86 fruitless years, the Sox archaic approach to building a team that would bash the ball in Fenway Park but seldomly focused on pitching, led the team to the same result year after year.  And while the team had its fair share of talented pitchers after the rebirth of baseball in Boston that was the Impossible Dream team in 1967 – Jim Lonborg, Luis Tiant, Bill Lee, Dennis Eckersley, Bruce Hurst, Roger Clemens, and the incomparable Pedro Martinez to name a few – the curse that began when Babe Ruth was sold to the New York Yankees in 1920, wasn’t broken until Curt Schilling hitchhiked from Arizona to do the job.

The point is a simple one and often repeated when it comes to the 2015 Red Sox.  The Sox starting staff, as currently constituted, may be good enough to get the team to the trading deadline, but rest assured, the odds of them carrying their team to a second Series title in three years are slim to none.

Unless Clay Buchholz suddenly puts together a year where he is productive and healthy from April to October, or Rick Porcello, Joe Kelly, Wade Miley, and Justin Masterson show they can take their game to another level, the Sox will need to make a deal for a front line starter if they hope to sip champagne this postseason.

The party line entering training camp was that the primarily sinker/ground ball staff would eat innings and pitch on a regular basis into the 6th or 7th inning of games.  At that point, what was thought to be the strength of the staff, the back end of the bullpen, would nail down games for the club.

That still may be true, but thus far in Grapefruit League action, it has not looked like that plan is panning out just yet.

In their last turn through the rotation, the only bright light among those to be thought to be heading north with the team for the opener in Philadelphia against the Phillies on April 6th, has been the free agent to be, Porcello.

On Sunday, Red Sox redux Masterson – he of the 6.48 ERA in 3 spring starts – was lit up to the tune of 7 hits, 6 earned runs and 2 bombs in 3 1/3 innings against the Sox opening day opponents.  Miley – who followed Masterson’s starting performance by getting beat around the ballpark himself – posted a line of 3 innings pitched, 6 hits, 4 runs, all earned, and surrendered a long ball himself to former slugger Ryan Howard.

On Monday, Kelly – who had to leave the game with an issue with his biceps in his pitching arm and likely will miss his next start – was hit around like he was throwing batting practice against the Mets, giving up 7 hits and 3 earned runs in 2 2/3 innings of work.  Opponents are now hitting .436 against Kelly in his 3 starts, and he boasts a John Wasdin-like 11.05 ERA this spring.

On Tuesday, the de facto ace of the staff (And if that doesn’t scare the bleep out of Sox fans, nothing will.), Buchholz, was hit hard for the first time all spring, giving up his first runs of the exhibition season against the Braves lineup that featured old friend Jonny Gomes batting third.

It wasn’t until Wednesday that Porcello righted the ship, pitching 4 strong innings, allowing 1 run on 3 hits over his 4 innings of work.  And while the Sox should be encouraged by his performance in Fort Myers so far – opponents are hitting just .256 against the sinkerballer, and he has surrendered only 2 earned runs – general manager Ben Cherington and manager John Farrell have to be expecting more out of the other “ace of the day” starters.

Adding to the Sox misery on the mound has been the performance and health of closer Koji Uehara.  Koji hasn’t been Koji this spring, in 3 innings of work he has surrendered 7 hits and 2 runs.  Opponents who used to not have a chance no matter what time of the year it was – Uehara had not given up a run in the spring in his previous 2 camps with Boston – are now hitting at a .467 clip against the 40 year old reliever.  In addition, the once lights out closer recently acknowledged that he is suffering from a left leg issue that in his words makes him a “close call” to start the season with the Sox.

Sure, it is early, and yes the first few starts of the spring are when pitches are working on particular pitches or simply getting stretched out for the upcoming season.  However, from here on out is when they will begin to game plan more for their opponents, and go from simply throwing to actually pitching.  Going forward, results count for the pitchers, like it or not.

Those people who will say you simply have to throw out the spring training stats when it comes to starters, are the same ones who will point to Buchholz scoreless first 2 starts as encouraging, or Mookie Betts torrid .448 start as proof he belongs in the big leagues.  You can’t have your cake and eat it too, it just doesn’t work that way.

The Sox are built to bash, and chances are they will be in the thick of things come the dog days of summer.  But unless one or two of their starting pitchers prove themselves to be thoroughbreds, and the rest of the staff shows they have enough bite to pull the Sox sled every 5th day, the Sox will be forced look to the outside the organization for the arm to pitch them to the promised land.

Otherwise, it will be back to the future for the Red Sox, and nobody in the Nation wants to go there.