Silent Sox need to turn up the volume before Spring Training 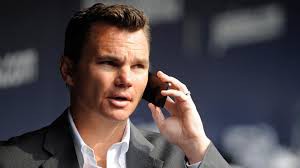 Lost in the middle of overblown blizzard talk, and the deflated football dialog that is likely to overshadow a possible fourth Super Bowl championship for Bill Belichick and Tom Brady, it is easy to over look the fact that the Boston Red Sox are less than a month away from reporting to Spring Training next month in sunny Fort Myers, Florida.  While that is likely to warm the cockles of shovel weary seamheads from Bangor, Maine to Westerly, Rhode Island, and everywhere in between, the Sox still have a vacancy sign in the top two spots of their starting rotation, and a roster that boasts six outfielders for three starting spots.

A shoe has to drop somewhere before pitchers and catchers report on February 20th, right?

Given the cone of silence that has descended over Yawkey Way since the team lost out to Theo Epstein and the Chicago Cubs in their pursuit to sign former staff ace Jon Lester in early December, it is anyone’s guess as to who will be getting their Sox on for the Olde Towne Team by the time the position players start their first workouts on February 26th.

Rumors still persist out of Philadelphia that Cole Hamels can be had if the price is right.  The only trouble there is Phillies general manager Ruben Amaro is not only asking for the moon and the stars in return, he might just be demanding the movie rights to Deflategate now as well.  Even Bob Barker would balk at that.  And with the addition of free agent Max Scherzer (whose acquisition costs were the polar opposite of free) to take the top spot in their suddenly loaded rotation, talk of free agent to be Jordan Zimmermann’s availability from the Washington Nationals via trade has reemerged as well.

Then there always remains the yet to be signed, free agent James Shields, who would cost the Sox nothing but money, which we all know they have plenty of.  The problem there is “Big Game James” is not a number one starter, although he is likely to get paid like one.  And at the ripe old age of 33 for a starting pitcher, anything short of signing him to a 2 or 3 year deal with an overpayment on salary in return, would go against everything that caused the team to cap their offer to Lester – who is 3 years younger than Shields – at 6 years and $135 million.

Sox general manager Ben Cherington will tell you that the Sox are fine with the rotation they currently have entering the season and he is probably right.  The AL East is not what it was a decade or so ago – mandatory testing for performance enhancing drugs has gone a long way to help with that – and the Kansas City Royals proved that you can make it to game 7 of the World Series with a starting staff that is the definition of mediocre.

Still, the Sox would be smart to address one of the top two spots in their rotation prior to spring training if possible, because once the season starts the price for pitching does nothing but go up.  The thought of Clay Buchholz anchoring his staff as they head into a September playoff push should be enough to motivate Cherington – not to mention keeping him awake at night – to make a move for a top line starter before migrating to southwest Florida in February.

And the roster composition as it stands is a problem waiting to happen as well.  Shane Victorino – who was a driving force behind the improbable World Series Championship run in 2013 – is currently on the outside looking in of a starting outfield that projects to be Hanley Ramirez in left field, Rusney Castillo in center, and Mookie Betts in right.  This is the same Victorino that Cherington revealed to the Boston Herald’s Mike Silverman was texting pictures of his abs to manager John Farrell just last week.

This is big, maybe even weird: Cherington said Victorino is texting pics of his abs to Farrell. #RedSox

Something tells me every little thing won’t be alright if come opening day Shane finds himself on the sidelines for the Sox.

Then there is the curious case of Allen Craig, who lost his swing last season to the tune of hitting .215 between the St. Louis Cardinals and the Red Sox, and just might have lost any trade value he had as well.  While due to his versatility, Craig could project as more of a super sub because of his ability to play both corner infield and outfield positions, the team has that currently covered by Brock Holt, who was one of the few bright spots on the Sox last season.

So while the snow continues to pile up, and the sports talk airways continue to blow exponentially more hot air than was found in the footballs in Foxboro during the AFC Championship game, baseball looms on the horizon like an oasis in the desert.  It is up to Ben Cherington to make the moves in order to make the upcoming baseball season a sanctuary that the seamheads are so desperately seeking during this long, cold winter.

If he fails to do so, the Sox might just turn out to be a mirage for the third time in four years, and nobody – the Boston brass in particular – wants that.