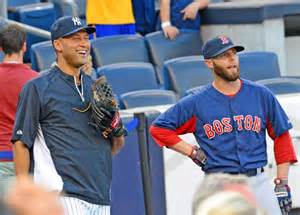 calls it quits on a remarkable career this weekend at Fenway Park I say this; lighten up Francis.

Granted, the over the top ads and the never ending chatter revolving Jeter can get a bit overwhelming, but the bottom line is the commercialization of his departure from the game says more about the world we live in rather than the player himself.  Regardless of how you feel about the rivalry or the uniform he wore for the past 20 seasons, if you love the game of baseball, you should celebrate the end of the career of a once in a generation player.

Quite frankly the bellyaching over the reaction to the heretofore “hated” rival is downright embarrassing.  Other than winning more than your team, has Derek Jeter ever given Red Sox fans a reason to dislike him?  I didn’t think so.

Like most of you, I grew up in a Sox centric house and was taught at an early age that the only thing worse than ignorance was arrogance and during the ‘70’s, there was nothing that embodied the word arrogant more than the New York Yankees.  My father’s hatred for the pinstripes ran so deep that he once chided me for eating a Reggie bar candy “in his house.”

I carried my father’s hatred of the Yankees with me as well, and it never burned hotter than it did during the epic run-ins in the early 2000’s (Zim deserved to go down!). It peaked during the ALCS match ups in ’03 and ’04, which tried the souls of Sox fans like never before.

But even when it burned its brightest, I could never muster a true dislike for Derek Jeter.

It is deliciously ironic that a fan base that holds a football coach that hasn’t won it anything in almost a decade in god like status and treats the said coach’s quarterback as the second coming, would have the gall to call anyone out over the extravagant excess of reverence shown towards an aging superstar who has finally decided to call it quits.

This just in Red Sox fans, Nomar wasn’t better.  No way, no how.

And you know as well as I do that if Jeter did in Boston what he did in the Bronx, Yawkey Way would now be Derek Drive and the number 2 would be going up on the right field façade this Sunday as Red Sox Nation stumbled all over themselves to bow before his altar.

Let’s face it Derek Jeter was the Tom Brady of baseball before Brady was Brady.  He won early and often, and he was probably given more credit for doing so than he deserved.

That being said, he was the face of the most esteemed franchise in the history of the sport for 20 years.  He carried himself – whether you want to admit it or not – with a class and grace like few have done over the history of the game.  And whether some Sox fans like it or not, he will be looked upon as a generational player for years to come.

And, oh yeah, he has two more rings than your beloved Brady.

No matter what the statistics say – there is no better use of the term that “stats are for losers” than here – Jeter brought a panache to the pinstripes that renewed the Red Sox/Yankees rivalry which before he hit the scene, was on life support.  You could argue – especially with this Yankees obsessed ownership – that because he and his teams were so good, the Sox were forced to raise their compete level to match the Jeter led Bronx Bombers.

And while his ride into the sunset has coincided with the Sox finishing in last place 2 out of the last 3 years, there is no doubt that the franchise’s 3 World Series championships in 10 years were in part a result of the precedent set by the pinstripes while Jeter was their captain.

Surely most in Sox Nation will join in the celebration as the Bronx take over the Back Bay this weekend, but there are those who will still refuse to remove their pink hats to honor the player that their own pseudo captain, Dustin Pedroia, has said he aspires to be like.

It is the same crowd that will break into a “Yankee Sucks” chant in a game against the Kansas City Royals in April and will stick around to sing “Sweet Caroline” in a blowout loss in a meaningless game in September.

But while these doofus drones delusively dream about Jon Lester signing back with the Sox this off-season, the true baseball fans of Boston will get to say goodbye to a legend and most worthy rival.