Revis comments on Brady’s 4th quarter performance..”He suckered in the defense, that’s what he did down the stretch.” 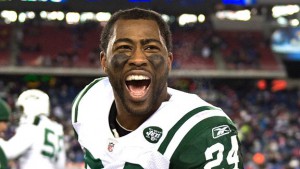 (On why the Jets weren’t able to hold Tom Brady in check in the fourth quarter)
“We tried to switch things up on Tom [Brady] and show him different looks, but Tom is great. He suckered in the defense, that’s what he did down the stretch.”

(On if the team could build on the first-half momentum)
“We knew what type of game it was going to be, it was going to be a physical game. We made adjustments at halftime and came out and tried to execute the corrections we made at halftime. Like I said, we fought hard in the third quarter, but the big play was the third-and-17. That changed the momentum and they made more plays than we did.”

(On the battle with Patriots Wide Receiver Julian Edelman)
“Any receiver I go up against is going to be one of the top guys in the league. My job description is to cover some of the greatest receivers.”

(On what it was like being back at Gillette Stadium)
“It’s just a week seven game.”