Red Sox Have the Hottest Hitter by Kristy Spinelli

What were you doing when you were 26 years old??  My son is 26 years old, so that tells you what I was doing in 1990!  For Red Sox player, Jackie Bradley, Jr. his days have been filled with impressive hitting…

Jackie Bradley, Jr. (JBJ) at 26 is currently having a VERY good year!   The Red Sox drafted him in the 2011 MLB Draft being the 40th overall pick that year.  In 2010 he was named the College World Series Most Outstanding Player coming out of the University of South Carolina.  The Red Sox called him up for his first game in April of 2013 when he entered the season ranking 32nd overall on the MLB Top Prospects list.  After watching him through spring training, Red Sox manager John Farrell announced Bradley would be the Opening Day left fielder at Yankee Stadium.  His first day playing, the Red Sox won 8-2 over the Yankees. 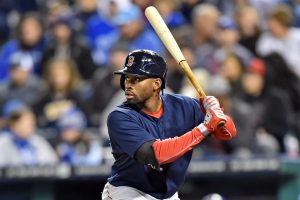 SO…who the hottest hitter in the game right now???  After his homer Wednesday night, Bradley extended his hitting streak to 24 games!!   Bradley said, “I’m just pleased with helping the team out.  We were able to get a win today, one out of two.  I’m sticking with my approach and the hits are falling.”

Bradley’s homer in the first inning made it 19 straight games where at least one player on the Red Sox has gone deep.  The record now ties a franchise record set by the 1996 Red Sox team…with 35 homers during this run, that is five more than the previous Sox’s 1996 stretch. 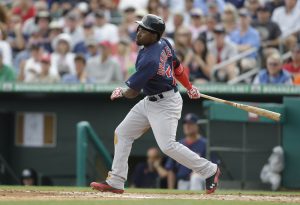 Pay attention to his pre-batting ritual…Bradley writes “M.S.” in the dirt to honor his best friend Matt Saye who died in a car accident last August.  “You never know what the next day will bring, if there IS a next day.  This really all came to me after my best friend passed away…he was like a brother to me.  In his obituary, I was mentioned as his only surviving brother.  And he was a different race…white.  That’s how close we were.  I know he has my back and he’s there supporting me.”

The Red Sox are off tonight for a much deserved rest, they will be back in Boston with a three game series at Fenway against the Indians and then games against the Rockies next week.