Red Sox win !….. One game away from the World Series….Can you believe it ? 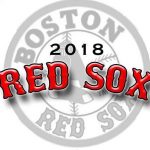 BRADLEY POWER HAMMER: JACKIE BRADLEY JR’S two-run, sixth inning home run gave him multiple RBI in three straight Postseason games, making him the 25th player in history to reach that mark and the first to ever accomplish the feat from the No. 9 position in the batting order…The record for most consecutive Postseason games with multiple RBI is four by REGGIE SANDERS of the Cardinals in 2005…Bradley has nine RBI in the ALCS, two short of DAVID ORTIZ’S franchise record for most RBI in one ALCS…Ortiz had 11 RBI in the 2004 ALCS vs. the Yankees…The franchise record for most RBI in any Postseason series is held by JOHN VALENTIN, who had 12 RBI in the 1999 ALDS vs. Cleveland.

DEVERS DOUBLES UP: RAFAEL DEVERS’ two-run single in the first inning of Game 4 marked the second Postseason game of his career to date with multiple RBI, following his three-RBI effort in Game 3 of the ALDS vs. the Indians Oct. 8…Devers, who turns 22 years old on Oct. 24, is one of just five players in MLB history with two-or-more Postseason games with at least two RBI before the age of 22, joining ANDRUW JONES (three games), MIGUEL CABRERA (three games), MICKEY MANTLE (three games) and BRYCE HARPER (two games).
THREE FOR CARLOS: CARLOS CORREA’S three hits marked t

he 35th time in Astros Postseason history that a player posted a three-hit game and the second time in ALCS play following JOSE ALTUVE’S three-hit effort in Game 1 of the 2017 ALCS…Correa now has four three-hit games in the Postseason, trailing only Altuve, who has five, in Astros’ history…GEORGE SPRINGER later joined Correa with three hits in Game 4 when he doubled in the eighth inning, becoming the third Astros player with three hits in an ALCS game.

SAVE TWO: CRAIG KIMBREL’S six-out save was the first of his career in either the regular season or Postseason…Kimbrel had previously worked 2.0 innings in a game five times: One each in the 2010, 2011, 2016 and 2017 regular seasons and once in the 2010 NLDS…In those five games, Kimbrel recorded two wins and three no decisions but never a save.