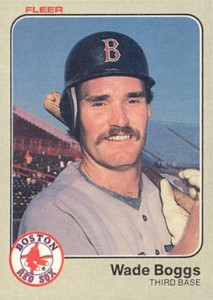 BOSTON, MA – The Red Sox today announced that the club will retire Wade Boggs’ uniform number 26 on May 26, 2016. The Hall of Famer’s .338 batting average with the Red Sox is second only to Ted Williams, and no one has ever played more games at third base in team history. He helped lead the Red Sox to three postseason berths, including the 1986 American League Championship, whose 30th anniversary will be celebrated this year.

“Wade Boggs was the best third baseman in Red Sox history and one of the best hitters of his generation,” said Red Sox Principal Owner John Henry. “Whether it was his legendary hand-eye coordination or the discipline of his highly superstitious routine, his ability to hit line drive after line drive was remarkable. We congratulate our first ballot Hall of Famer on this recognition.”