YESTERDAY’S NEWS: The Red Sox defeated the Pirates, 4-3, yesterday at JetBlue Park…PIT took a 3-0 lead in the top of the 3rd inning, but BOS scored once in the 3rd, once in the 4th, and twice in the 7th…Minor leaguer Brett Netzer (2017 June Draft, 3rd round) collected the winning hit, a 2-out, 2-RBI double.
7 Red Sox relievers combined to pitch 6.2 scoreless innings (4 H, BB, 7 SO)…Joe Kelly struck out all 3 batters faced in the 4th inning and Matt Barnes recorded 2 SO in a perfect 5th. 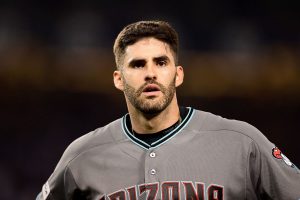 ROAD TRIPPIN’: Today begins a 10-day stretch in which the Red Sox will play 3 home games and 7 road games…Their first off day is scheduled for Monday, 3/5, and they will play a pair of split-squad games on Wednesday, 3/7 (vs. MIN, at PHI).

OLD FRIENDS: Red Sox manager Alex Cora and bullpen coach Craig Bjornson served on the coaching staff of the 2017 World Series champion Astros as bench coach and bullpen coach, respectively.
Red Sox OF/DH J.D. Martinez was selected by HOU in the 20th round of the 2009 June Draft and went on to appear in 252 games with the club from 2011- 13…In 2014, he opened spring training in the HOU organization but was released on 3/22; he signed with DET as a minor league free agent 2 days later.
RHP Fernando Rodriguez Jr., who is scheduled to pitch in relief today, made 118 relief appearances for the Astros from 2011-12, including a career-best 71 in 2012.

HOME FIELD ADVANTAGE: The Red Sox have sold out each of their last 110 home Grapefruit League games, includ- ing each of their final 10 at City of Palms Park and all 100 at JetBlue Park since its opening in 2012…The Sox have sold out 213 of their last 214 home Grapefruit League games.
The Red Sox are in their 7th spring at the Fenway South Spring Training and Player Development Complex in Fort Myers, FL (2012-18)…This is the 26th consecutive season the Sox have called Fort Myers their Spring Training home (1993-2018), having played at City of Palms Park through 2011…Only Winter Haven, FL hosted the club for more springs (27 years, 1966-92).

CY OF RELIEF: Rick Porcello is making his Grapefruit League debut today…The 2016 AL Cy Young Award win- ner enters his 4th season with the Red Sox, his 10th in the majors since opening the 2009 season in DET’s starting rotation at only 20 years old.
In 2017, the Sox were 15-0 in Porcello’s starts when they scored 3+ runs with him in the game…Porcello received 0 runs of support in 10 of his 17 losses…He led MLB with 20 unearned runs allowed, and his 9 losses in quality starts were the most by a Red Sox pitcher in 87 years (Milt Gaston, 9 in 1930).

SUPPORTING PARKLAND: Fans may now bid on auto- graphed versions of the Marjory Stoneman Douglas High School Eagles baseball team hats worn by Red Sox players and coaches on 2/23 vs. MIN…The hats are being auctioned off in an effort to benefit funds related to assisting victims and families of the tragic shooting at Stoneman Douglas on 2/14.
Fans can visit www.redsox.com/parkland to take part in the auction…Proceeds will be donated to the Broward Education Foundation, which established the official Stoneman Douglas Victims Fund…More information can be found at browardedfoundation.org.