Red Sox make a splash, but do they know how to swim? 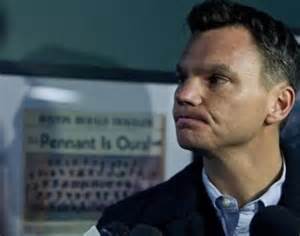 For those who were looking for general manager Ben Cherington and the Red Sox to make a splash in free agency this winter, today is your lucky day.  If the multiple reports are true – and there is no reason to believe otherwise – the Sox GM has deals in place for Hanley Ramirez and Pablo Sandoval, both for 5 years and somewhere in the range of $90 to $100 million a piece.

If that is not making a splash, I don’t know what is.  The Sox had better cross their fingers that by the time he reaches the final year of this deal, the Kung Fu Panda hasn’t gotten so big that he drives all the water out of the pool when descends from the industrial strength diving board he will have to employ to do so.

Could this be a sign that Cherington has convinced John Henry and Larry Lucchino to move away from the short-lived practice of not offering long term deals to players nearing or over the age of 30 and that they will extend for Jon Lester next?  Possibly, but one would have thought if they were going to do so their opening offer would have been more than the 6 year, $110 to $120 million deal they reportedly offered him last week when they met with him at his home in suburban Atlanta.

What these two deals prove more than anything else is that the Sox never really had a plan to begin with.  Two years ago at this time they were in desperate need of bodies that were not named Carl Crawford, Adrian Gonzalez and Josh Beckett, and that could help them transition to what, at the time, was believed to be the next wave of talent in their system in the form of Jackie Bradley Jr., Xander Bogaerts and Will Middlebrooks.

So that winter – while feeling the sting of the train wreck that was the Bobby Valentine “led” team that finished with the worst record in some four decades for the franchise – they overpaid for players who would take more money and less term and signed Shane Victorino and Mike Napoli for 3 years and $36 million each (Napoli’s deal was reduced to a 1 year deal after a physical showed a degenerative hip issue), and pitcher Ryan Dempster for 2 years and $26.5 million.  The thought was to bring in quality clubhouse guys that could stabilize what had become a toxic clubhouse, while bringing the team back to respectability on the field.

We all know what happened next; the team caught lightning in a bottle and went on to win one of the most improbable championships in recent memory in all of sports.

The remarkable turnaround caused the club to develop a false sense of security in what was looked upon from the start as a – cover your eyes, Larry – bridge year in every form and fashion.  They were so enamored by their good fortune that after letting Jacoby Ellsbury walk in free agency to the hated New York Yankees, they did little or next to nothing to improve a club that lost the player that drove their offense, adding only the reclamation project that was Grady Sizemore.

In fact, Lucchino was so smug that he decided to throw some mud at the Bronx Bombers approach to team building last February in Spring Training.  Lucchino said, “We’re very different animals. I’m proud of that difference, I always cringe when people lump us together. Other baseball teams sometimes do that. They are still, this year at least, relying heavily on their inimitable old-fashioned Yankees style of high-priced, long-term free agents. I can’t say I wish them well, but I think we’ve taken a different approach.”

So much for that, eh Larry?

That quote there and the team’s actions in free agency thus far this season goes to show that they did not then, and do not now, have a defined strategy to put to an end the yoyo like way the team has bounced around in the standings for the better part of the last 4 years.

The prospects they relied on so heavily at the start of last season – Bradley and Middlebrooks in particular – have been failures, or in the case of Bogaerts have struggle mightily, and of the top pitching prospects that made appearances in the majors last season including Anthony Ranaudo, Allen Webster, Ruby DeLaRosa and Brandon Workman, none have shown the ability to pitch consistently at the major league level.

The Sox are in the position they are in now – having to overpay for free agents to fill their roster – because of poor planning, rushing prospects through the system and putting them in the big leagues before they were ready, and their toying with Lester last spring when they could have signed him to a deal that most likely would have been below the 6 year, $110 to $120 deal they offered him last week, one which will fall well under what the talented lefty will yield now that he has hit the market.

If general managers had walk up songs like the players do before each at bat these days, Ben’s would be “Karma Chameleon” by the Culture Club.  What could be a better fit for a baseball executive that seems to change course every offseason?

So the Sox have made their splash and they are front runners to win this winter.  Big deal.  Unless they develop a direction and a long-term plan for the future of the franchise going forward – and most importantly improve their starting pitching – they will just continue to be the pre-2004-esque Red Sox, bouncing year to year in the standings while applying band-aids instead of executing a plan.

Good luck spinning this one Larry, even Dr. Charles is going to struggle making you look good now.