OPENING ACT: Chris Sale, who turns 29 years old today, allowed only 1 hit in 6.0 scoreless innings yesterday…The last pitchers to throw 6.0+ scoreless innings and allow no more than 1 hit on Opening Day were Clayton Kershaw (2016), Sonny Gray (2015), and Kevin Brown (1997)…No other Red Sox pitcher has done that since at least 1908. 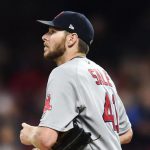