Red Sox in Toronto for the weekend 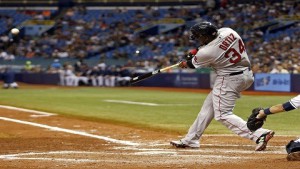 MORE RECORDS FOR PAPI: On Wednesday, David Ortiz became the first Red Sox player ever to reach 35 homers in 6 different seasons…He has now driven in 97 runs, 3 shy of reaching 100 RBI for the 9th time in his career, all since joining the Red Sox in 2003…It would tie Ted Williams for the most 100-RBI seasons in team history.
· It would also mark his 9th career season with at least 30 home runs and 100 RBI, which would extend his club record (Williams ranks 2nd with 7)…He would join Babe Ruth and Lou Gehrig (both with NYY) as the only players with at least 9 different 30-HR/100-RBI seasons for a single American League team