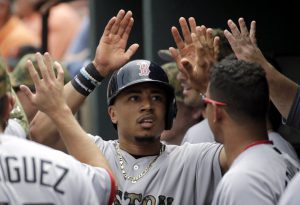 X FACTOR: Xander Bogaerts is in the midst of a career-best 23-game hitting streak, MLB’s 2nd-longest of the season (Bradley Jr.-29)…According to Elias, the Red Sox are the first team in AL history to have 2 different players record a hitting streak of at least 20 games before June 1.
· Bogaerts leads the majors with 271 hits and a .328 AVG since the start of 2015…His 75 hits this season are tied with Daniel Murphy for the MLB lead, while his .354 AVG ranks 2nd behind only Murphy (.395).

WRIGHT & ROCKET: Steven Wright has pitched a complete game in each of his last 3 road starts, becoming the first Red Sox to accomplish the feat since Roger Clemens (5 straight from 1991-92)…It is tied for the longest such streak by any pitcher since 2000, joining Mark Buehrle (2015), Dallas Braden (2010), and Roy Halladay (2008).
· Wright’s 3 quality starts are tied with Clayton Kershaw, Chris Sale, and Johnny Cueto for most in the majors this season…No other pitcher has more than 1.