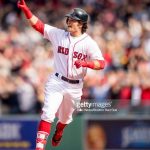 THE WRIGHT STUFF: Steven Wright enters today with MLB’s longest active scoreless streak (22.2 IP)…It is the longest by a Red Sox pitcher since Koji Uehara in 2013 (30.1 IP)…The longest scoreless streak for any pitcher this season is 25.0 IP (Daniel Mengden, 5/15-31).
>>> The Red Sox have won each of Christian Vázquez’s last 13 starts at catcher, allowing just 28 runs in those games.