YESTERDAY’S NEWS: The Sox defeated the Mariners last night at Safeco Field, 2-1, in the opener of a 4-game series…Boston scored the deciding run on a 9th-inning sac fly by Mookie Betts (reached on error) to score Brock Holt. 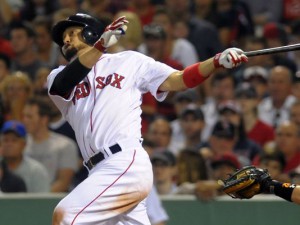 · Shane Victorino reached 3 times, going 2-for-3, with a homer and a walk, and also had an outfield assist as part of a double play…He become the first Red Sox RF to homer and double up a base runner in the same game since Trot Nixon on 9/20/2000 vs. CLE…Hanley Ramriez (4-for-5, 2B) set a season-high in hits.
· Boston pitchers induced 21 ground balls, the club’s most in a 9-inning game this season…Starter Joe Kelly gave up 1 run in 6.1 innings and induced 16 grounders, 2 more than any other Sox pitcher in a game this season…Matt Barnes pitched a scoreless 8th for his 2nd ML win, both in his last 2 outings…Koji Uehara picked up his 8th save with a scoreless 9th.
· It was Boston’s 5th last at-bat win of 2015…In the AL, only Houston and Kansas City have more (7 each).

FIVE ALIVE: Boston has won 4 of its last 5 games, the club’s best 5-game stretch since going 4-1 from 4/10-14…In this run, all 4 wins have been decided by 3 runs or less, including 3 by 2 runs or less and a pair of 1-run victories.
· The Sox have scored 2 runs in each of their last 3 games, including 2 wins…4 of Boston’s 17 wins (24%) have come when scoring 2 runs or less, trailing only DET (6) and TB (5) for the most such victories in MLB.
· The Red Sox have held opponents hitless in their last 21 straight AB with RISP dating back to the end of Tuesday night’s game in Oakland.