Red Sox brass needs to recognize that Bradley Jr. is best suited for the bench

“He’s a very good player. He’s very important to us,” said the Sox big boss. “He’s one of the best defensive center fielders in Major League Baseball. We see what he can do as an overall player. Last year I think he wasn’t as good offensively as the year before but the reality is Jackie is a really good player who stabilizes our team. He brings a quality individual that comes to play day in and day out and respected in the clubhouse and is someone who’s very well thought of by us.”

At the time that may have been his perception, but this is the reality. 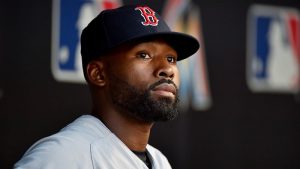 Bradley Jr. is a career .234 hitter who only once in his six big league seasons has hit over .250 (.267 in 2016).  And while he has shown the potential to heat up at the plate for weeks at a time – his supporters will point to his 29-game hit streak in ’16 as a case in point – he too often puts up at-bats that not many National League pitchers would be proud of.

When asked about Bradley Jr.’s three at-bats following the Sox 6-2 win over the sad-sack Baltimore Orioles on Thursday night, rookie manager Alex Cora was quick to focus on the positive.  “Good, good…I mean, he contributed,” said the somewhat overly optimistic skipper.  “He got his walk, stole a base.  Scored on a sac [sacrifice] fly, that’s good.  Good swings.”

Oh, brother.  It’s one thing when you praise a guy for hitting the ball hard at someone three times in a night and still go hitless.  It’s another thing altogether when you are trying to prop up a guy who wore the collar while striking out once and leave two men on base.

As things stand, the Red Sox overhyped center fielder is a 28-year-old that is hitting .167 for the season when most Major Leaguers with any real potential are just hitting their stride.  What Dombrowski and the rest of the Boston brass see in him is not apparent to many other baseball observers, and his stock is sinking more and more each time he sulks back to the dugout with his bat on his shoulder.

While some purists will say that championships are won with pitching and defense – perhaps the most overused cliché in professional sports – keep in mind that the Red Sox won their first World Championship in 86 years with a hack named Manny Ramirez patrolling left field in 2004.  And while it would have been tough to think that J.D. Martinez could have gotten off to a better start than he has so far in Boston, the numbers clearly indicate that his performance at the plate is better when he is in the outfield and not as a designated hitter.

Bradley Jr.’s role is clearly defined and has been for a while now.  He is the ultimate fourth outfielder, who can come in late in games defensively, and spell players when they are dinged up for a couple of weeks at a time.

The fact that Dombrowski and his staff overrated him to the point that they wasted what could have been a valuable trade chip this past off-season is a mistake that can’t be rectified.  However, if he and Cora continue to trot him out as a starter on even a semi-regular while that battle a New York Yankees team who is likely only to continue to get better, it will not only possibly cost them the AL East, but any chance they may have to play deep into October.