Red Sox are heading to the World Series ! 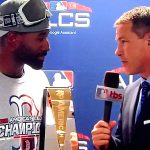 THE 114th FALL CLASSIC: The Red Sox advanced to their first World Series since 2013 with a win in Game 5…The World Series will open in Boston on Tuesday, Oct. 23, against either the Brewers or the Dodgers…The official Workout Day for both teams will be held on Monday at Fenway Park…

DEVERS DELIVERS: RAFAEL DEVERS’ three-run homer in the sixth inning gave him three career Postseason games with at least two RBI before the age of 22, joining ANDRUW JONES, MIGUEL CABRERA and Hall of Famer MICKEY MANTLE as the only four members of that club. 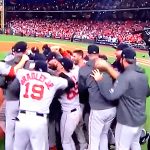 RESTED UP: DAVID PRICE became the first pitcher working on three-or-fewer days rest to record at least 6.0 shutout innings in a Postseason game since CLAYTON KERSHAW of the Dodgers blanked the Cubs in Game 2 of the 2016 NLCS…The last time a pitcher in the ALCS worked at least 6.0 shutout innings on three-or-fewer days was MIKE MUSSINA of the Orioles in Game 6 of the 1997 ALCS against the Indians…Price’s nine strikeouts trail only Mussina’s 10 strikeouts among ALCS starters with the same criteria.

TRIO OF SAVES: CRAIG KIMBREL became the ninth pitcher in ALCS history with three saves in one series…Hall of Famer DENNIS ECKERSLEY (1988 ALCS for Oakland) and GREG HOLLAND (2014 ALCS for Kansas City) each saved four games in one ALCS.

JOSE’S HITS: JOSE ALTUVE’S first-inning single was the 35th Postseason hit of his career, moving him past LANCE BERKMAN and into a tie with CARLOS CORREA for third place on the team’s all-time list.

J.D. HITS J.V.: J.D. MARTINEZ’S third-inning home run was the first allowed by JUSTIN VERLANDER in an ALCS game since Game 3 of the 2013 ALCS when the Red Sox’s MIKE NAPOLI accounted for the only run of the game in a 1-0 Boston win over the Tigers…Verlander had gone three straight ALCS starts without allowing a homer and had worked a total of 25.0 straight complete innings without a home run in ALCS play.

EXTRA YULI: YULI GURRIEL’S fourth-inning double gave him 13 extra base hits for his Postseason career, passing Hall of Famer TONY PEREZ for the top spot among Cuban-born players…Gurriel now has nine Postseason doubles, tied with Hall of Famer CRAIG BIGGIO for second place on the Astros all-time list behind GEORGE SPRINGER, who has 10.