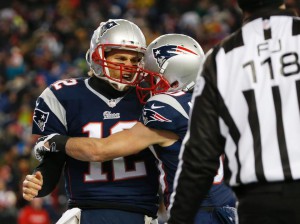 Had it all the way, right Patriots fans?  Entering yesterday afternoon’s Divisional playoff game against the Ravens, Patriots Nation was pretty much universally convinced that their team would dismiss the dirty birds from Baltimore without much trouble.  While the front seven of the Ravens defense was formidable, their secondary sucked and their offense was average at best.

And lets not forget, with the addition of Darrelle Revis and Brandon Browner to the Pats defensive backfield, New England was entering the game with a defense that had fans harking back to the halcyon days of the early 2000’s, when the Patriots defense smothered teams that came to Foxboro in January.

Led by quarterback Joe Flacco, who seems to morph into the second coming of Joe Montana once the postseason starts, the Ravens offense ripped the Pats defense to shreds, jumping out to a 14-0 lead that left Patriots Nation with their collective heart in their throat.  While the defensive performance turned in yesterday by Bill Belichick’s boys will most certainly have to improve if he hopes to contend for his fourth Super Bowl ring as coach of the Patriots, the thing that sets this Pats team apart from those who have not been able to win it all since the 2004 season is that they don’t surrender after they have been punched in the mouth.

Tom Brady and his tricked out offense – Julien Edelman recorded his first touchdown pass in his first professional attempt, and the Pats screwed with the Ravens by going to a 4 man offensive line while making the tight end eligible from the tackle position – showed they are willing to brawl with the best, and the defense made plays when they had to down the stretch.

I think everyone can agree that there are no longer any great teams left in football, the salary cap has helped accomplish Pete Rozelle’s lifelong dream of parity.  The teams that win in the league now are teams that can deal with adversity the best, and right now, there seems to be no team better at doing that than the New England Patriots.

You can’t face much more adversity than the Patriots did in the first month of the season.  Prior to the season even starting, Belichick rocked the room by dishing longtime left guard Logan Mankins to the Tampa Bay Buccaneers because Mankins refused to take enough of a paycheck to satisfy his frugal former boss.  The Pats came out of the gates sluggish to say the least, and there was even some silly talk about shipping out Tom Brady before the trading deadline in October.

Of course, as they seemingly always do under the leadership of the Belichick/Brady dynamic duo, they righted the ship to become the best team in the league heading into December.  When the offensive line began to struggle again late in the season due to injury, questions were raised again about the offense’s ability to score points heading into the playoffs. When the Ravens scored on both of their first two possessions and the Patriots meekly went three and out the first time they got the ball, some were questioning whether or not Tom Terrific and his offense could even make a game of it.

Question it no more.  If the Patriots have proven one thing this year, it is that they will not quit.  They may not have the most talent of any of the Belichick/Brady era Pats, but they have a heart equal to any of the championship teams.

What happened in Foxboro yesterday does not happen last year, the year before, or the year before that.  Those teams would have turtled at 14-0 in the first quarter, never mind 28-14 in the third.  For some reason the Ravens have the Patriots number in the playoffs, and those teams of the past would not have been willing, or able, to fight back the way the 2014 Patriots did.

You can argue that the Pats passed their biggest hurdle on the way to Glendale, Arizona last night in Foxboro.  Peyton Manning seems broken as the Denver Broncos backed into the playoffs, and Andrew Luck does not have a supporting cast that is capable of coming to Gillette in January to beat Bill’s boys.

The Patriots got into a street fight with the bullies from Baltimore last night, and they did what no Patriots team has been able to do since February of 2005, they delivered the knockout blow.  Now they sit two wins away from their fourth Super Bowl Championship under the leadership of their Hall of Fame coach and quarterback.

Whether the Pats will claim the Lombardi Trophy on February 1st is anyone’s guess.  What is for certain is that they will fight whoever stands between them and the title to the bitter end.