BOSTON – An amazingly improbable goal and a lucky burrito were the unlikely keys to Providence College’s most significant win in the school’s 98 year history tonight over at the TD Garden. 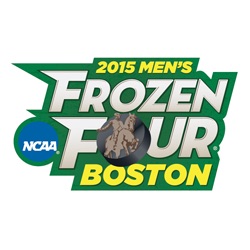 The 4th seeded PC Friars upended the Terriers of Boston University in the NCAA Men’s Division I Hockey title game 4-3 to capture the schoolyardl’s first major championship. In doing so, Providence joins 2013 champion Yale as the only two No. 4 seed since the expansion of the field to 16 teams in 2003 to capture the crown.

BU dominated the first 50 minutes of the game and set a Finals record for most shots on goal after two periods (40). The 39 combined shots in the second period (BU 22, PC 17) also set an NCAA title game record.

“And I thought it’s a little bit like our season. We started a little bit slow but we got better and better. And we played….. a pretty good third period, and obviously got a big bounce, “ PC coach Nate Leaman said, sporting his championship hat in his post-game presser.

“And we had a heck of a bounce,and I think that got our bench alive a little bit.”
PC was playing back on its heals for much of the game and the Terriers made every tape-to-tape pass look effortless. But with BU leading 3–2 with just over eight and a half minutes remaining in the game, the unthinkable happened. For BU, anyway. 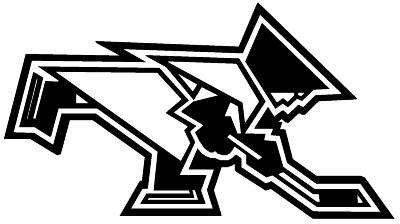 The Friars cleared the zone and Tom Parisi took the puck at the redline and lofted it towards BU goalie Matt O’Connor, who caught it eye-high. Then indecision quickly set in and likely cost the Terriers its sixth national crown.

The junior from Toronto couldn’t decide whether to squeeze his glove or drop the puck next to his net. And the result was disastrous. The puck squirted out of his mitt and slowly dribbled through O’Connor’s legs and across the goal line.

Half of the 18,168 fans in the house were slack-jawed and stunned. When the enormity of the goal was processed three beats later, the other half cheered wildly.

“I couldn’t really see it in my glove. I thought it rolled out of it. I tried to drop and throw it to Jack (Eichel) and it was too late,” O’Connor said in the locker room afterwards.

PC goalie Jon Gillies, named to the All Tournament Team and Most Outstanding Player, stood up for his fellow net minder. “As a goalie you feel for him. I know him personally. He’s a wonderful goalie. He had a great year and he was fantastic throughout the tournament to get here.

“And from a goaltending standpoint, we’ve all had one of those, and you feel for him and I think that it energized our bench a lot. We got that belief because we were getting some chances, just weren’t able to kind of bear down and put them home. And something like that happens, you start to take on faith a little bit and start to believe even more.”

The shellshocked Terriers didn’t give up, but they never recovered.

BU coach and Cranston, RI native Dave Quinn called his timeout after after a BU icing call. Junior Kevin Rooney won the draw and found Tanev, who whizzed one past O’Connor’s ear.

“It was amazing, I couldn’t even register what was going on. It was a heck of a draw win by Kevin Rooney,” Tanev offered during his team’s on-ice celebration . “Steve McParland was able to give me some space and I was able to rip that puck and it went in. It’s something I dreamed of ever since I wanted to play college hockey. The words can’t describe how I feel right now.”

Despite having difficulty in getting the puck out of their own end for the first two periods, PC actually scored the first goal of the game half way through the first period.

Co-Captain Noel Acciari set it up with two shots, the second hitting the left post and bouncing out to Anthony Florentino beyond the left circle. He ripped a one-timer past a tight triangle of BU’s Mike Moran, Matt Grzelcyk and Chase Phelps that beat O’Connor two hole.

In a four second span a little over two minutes later, however, BU not only knotted the score, but took a 2-1 lead and it looked like PC’s title hopes were in serious trouble.
Ahti Oksanen found a millimeter’s space between Gillies’ glove, pad and the post to tie it. On the ensuing face-off, the Friars’ Florentino tapped the puck away from a charging Jack Eichel and over to a trailing Danny O’Regan, who snared it and put a backhander past Gillies.

The Oksanen and O’Regan goals four seconds apart broke by a second the NCAA Tournament record set by Michigan (vs Dartmouth) in the very first Division I championship game in 1948.

BU remained in charge, peppering Gillies with shot after shot, a total of 52 in all (49 saves). And BU had some strong stats on its side. When taking 40+ shots in a game this season, they were 7-2-0. When leading after two periods, which it did at 3-2 thanks to a Cason Hohmann shot past a sprawling Gillies, they were a perfect 19-0-0.

Meanwhile, PC was 3-10-1 when trailing after two. But the Friars did toss 43 of its own shots at O’Connor and outshot BU 20-12 in a furious third period. When trailing after two, Providence was just 2-8-2 this season, but they were a convincing 19-3-0 when scoring the game’s first goal.

Which brings into play the aforementioned lucky burrito.

Tired of the ubiquitous meals of chicken and mashed potatoes these past two weeks, Leaman and one of his assistant coaches -his said his staff are Chipotle guys- changed things up a bit for today’s lunch and hit a local Boloco restaurant, whose tag line is “Even a burrito aspires.”

In an exclusive one-on-one interview with a BSD writer after his presser, Leaman admitted to partaking of a seriously guilty pleasure. “They’ve got a terrific shake with peanut butter, banana and blueberries.

“You know four days straight of the same meal, you just want to change it up. So we were fortunate enough to get it……..Yeah. Maybe it was a lucky burrito. I don’t know. I haven’t thought of it yet. But it was a heck of a shake. I’ll tell you that.”

So did the resultant agita take his mind off tonight’s game for a few minutes? “Yeah, you know it was kind of good to kind of get out. It was a nice day in Boston so it was kind of nice to get out and not think about things for a bit.”