Price fails miserably in Gm-2, series now tied 1-1 heading back to the Bronx

THE RED SOX dropped Game 2 of the Division Series to the Yankees, evening the series at 1 game apiece. 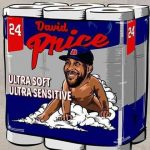 David Price was aweful in his start. Price gave up 3-run before getting yanked in the second inning. He allowed 3 ER over 1.2 IP in his 18th career postseason outing (10th start)…Fell to 2-9 in his postseason career.

Red Sox Nation had hoped that Price would be able to put his troubled past against the Yankees behind him. But that was just wishful thinking. Any momentum that the Sox were carrying in from Gm-1 was quickly extinguished with Prices’ effort or lack there of.

·       Surrendered 3 runs over the first 2 innings after jumping out to a 5-0 lead in the first 3 innings last night in Game 1…Were 34-39 in games when their opponent scored first during the regular season.

XANDER BOGAERTS (1-for-4, R, HR, RBI) put the Red Sox on the board with a solo HR in the 4th inning…Drove in his 2nd run of the series.

·       Was his longest career postseason relief outing and his longest postseason outing overall since starting Game 4 of the 2013 World Series with STL vs. BOS (5.1 IP, 2 ER).

RYAN BRASIER (1.0 IP, BB, 3 SO) struck out 3 in the 5th inning, including Giancarlo Stanton and Gary Sánchez consecutively with runners on 1st and 2nd.

IAN KINSLER (1-for-4, 2B, RBI) hit an RBI double off the Green Monster in the 7th inning…Stole 3rd base.

·       Has hit safely in each of the games of this series…Has 3 doubles in his last 6 overall games.

·       At the age of 36, became the oldest Red Sox player ever to steal a base in the postseason…The previous oldest had been George Whiteman in the 1918 World Series (35 years old).

J.D. MARTINEZ (1-for-4) singled down the 3rd base line in the 1st inning, reaching base in his first PA for the 2nd straight night.