Pouting Papi not happy with “critics” 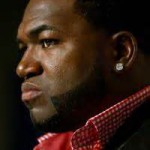 Today was the final day for position players to report to spring training for the soon to be defending World Series Champion Boston Red Sox.  While it was mostly as you would expect it to be – pretty much a joyful reunion for those who claimed baseball’s ultimate prize just last fall and a chance to yuck it up with teammates and reporters alike – David Ortiz came in as he has before, with a chip on his shoulder regarding his contract status.

While initially saying he would speak with the assembled media tomorrow, Big Papi couldn’t help himself and took the cheese when he was tracked down walking to his car in the parking lot by the Boston Herald’s John Tomase.

In a piece that ran on BostonHerald.com this afternoon (click here for link, http://bostonherald.com/sports/red_sox_mlb/clubhouse_insider/2014/02/ortiz_on_critics_every_time_i_talk_about_my_contract_i) Papi proceeded to lay into those who criticize him for talking about his contract status.  Below is a paragraph from Tomase’s post that pretty much sums up the sluggers feelings on the issue.

Oh Papi, when will you learn?

They bitch because they are sick of listening to you do the same thing each and every time you enter the final season of an existing contract.  You may not think so, but to many who have to listen it is the equivalent of having your 3 year old throw a hissy fit in the toy store because you won’t buy him the newest, shiniest bobble, even though he has a closet full of similar toys that even if he lived to be 100 would never get to play with them all.

My mother used to tell me when I was a kid, “I wish you could see what you look like when you act that way, maybe you would realize just how ridiculous you look.”  (That of course was long before the advent of smart phones to record one’s every move, or any phone that wasn’t stuck to the wall with a rotary dial…but I digress.)  Watching Ortiz’s performance over the years when it comes to contract time, I have finally come to realize just what she meant.

Initially, I – like some others – was on board for the Sox to extend the slugger this offseason and I wrote about it in this very spot (http://www.bostonsportsdesk.com/sox-should-extend-ortiz/).  I felt that is was in the best interest of everyone involved to nip, what was sure to be an issue, in the bud and that based on his performance that helped lead the team to a title, it was best to have a happy Papi.

And we all know, a happy Papi is a productive Papi.

But let’s face it, he is not going anywhere – if the Sox want Ortiz for the 2015 season they simply have to tender him a contract at the end of the year and I doubt there would be any team in baseball that would back up the Brinks truck with a multi-year deal while surrendering a number one draft pick to boot for a guy approaching 40 with a PED past – so Papi really doesn’t have a pot to piss in as far as leverage is concerned.

And he knows it, hence the whiny way of addressing the situation.

The Red Sox are under no obligation to talk contract with the designated hitter and there are many who believe that GM Ben Cherington only went to two years on the existing deal because he received assurances that this situation just as we have now would not take place this year and Ortiz would keep his mouth shut and play out the deal.

As it turns out, Papi can’t help himself.  But with tiresome tirades like the one today in Fort Myers, Ortiz is not helping his cause.  Big Papi is looking more like a big baby.