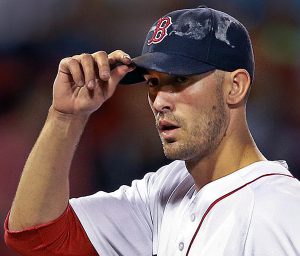 YESTERDAY’S NEWS: The Red Sox were dealt a 10-5 loss to the Astros yesterday at FITTEAM Ballpark of the Palm Beaches…Rick Porcello started and threw 2.0 scoreless in- nings in his 2018 Grapefruit League debut (4 SO).
Hanley Ramirez hit his 1st HR of the spring, a solo shot in the 4th inning…Non-roster invitee Bobby Poyner pitched a perfect 4th inning and has retired all 9 batters faced in Grapefruit League games.

LIKE FATHER, LIKE SON: Tate Matheny will join the Red Sox from minor league camp for today’s game at STL…His father, Mike Matheny, has managed the Cardinals since 2012.
Matheny enters the 2018 season ranked by Baseball America as the best defensive out elder in the Red Sox minor league system.
Nick Lovullo is also in Red Sox minor league camp… His father, Torey, led ARI to the 2017 postseason in his MLB managerial debut and was named the BBWAA NL Manager of the Year.

ROAD TRIPPIN’: Today, the Sox continue a 10-day stretch in which they will play 3 home games and 7 road games…Their rst off day is scheduled for Monday, 3/5, and they will play a pair of split-squad games on Wednesday, 3/7 (vs. MIN, at PHI).

HOME FIELD ADVANTAGE: The Red Sox have sold out each of their last 110 home Grapefruit League games, includ- ing each of their nal 10 at City of Palms Park and all 100 at JetBlue Park since its opening in 2012…The Sox have sold out 213 of their last 214 home Grapefruit League games.
The Red Sox are in their 7th spring at the Fenway South Spring Training and Player Development Complex in Fort Myers, FL (2012-18)…This is the 26th consecutive season the Sox have called Fort Myers their Spring Training home (1993-2018), having played at City of Palms Park through 2011…Only Winter Haven, FL hosted the club for more springs (27 years, 1966-92).