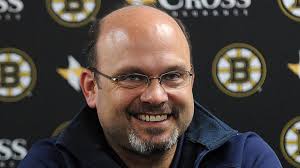 Well, that was underwhelming, but certainly not unexpected.  Only the most dyed in the wool black and gold believers actually thought that general manager Peter Chiarelli would make an impact move at the deadline, something he hasn’t actually made a habit of since he took over as the guy calling the shots for the Bruins regarding personnel in May of 2006.

Peter the Patient once again watched as the most prized possessions at the trading deadline – in the case of the Bruins, that being right shot/right wing and a depth defenseman – were picked off the board, deeming the prices too high, even for a desperate GM.  Instead, the B’s boss sent two second round draft picks (Their own, not the ones they got when PC vastly undersold Johnny Boychuk to the New York Islanders in October for two second rounders.) for the former number 6 overall draft pick in 2010, Brett Connolly, from division rival the Tampa Bay Lightning.

Look, I won’t lie, I couldn’t pick Connolly out of a line up if he was in it alone, and it is anybody’s best guess as to what he will be.  He was called “At his best: A hydrid of: Tomas Vanek, Peter Forsberg, Patrick Marleau” by The Hockey Writers in their draft preview nearly five years ago.  However, since he never really hit his stride with the Lightning, some scouts have called him the next Benoit Pouliot, who was selected 4th overall by the Minnesota Wild in 2005, and has more than earned the term journeyman, bouncing around the league to the tune of six teams, including the Bruins in 2011-12.

In what amounts to an afterthought deal, Chiarelli also added veteran Max Talbot from Colorado in exchange for the enigma that is Jordan Caron.  In doing so, he also added to the salary cap struggle the team faces going forward as Talbot is signed for next year at a $1.75 million cap hit, as opposed to Caron becoming a free agent at the end of the year and coming off the books.

So I guess it is safe to say that the promised “series of two or three steps throughout the course of the year” that Chiarelli spoke of after he sent Boychuk packing simply wasn’t meant to be, at least at the hand of the man that guides the not so steady Bruins ship.  And any thoughts of the Bruins getting aggressive and making a core altering deal went the way of forward Craig Cunningham, who the Bruins put on waivers for a deal that never happened, and ended up losing him for no return when he was claimed by the Arizona Coyotes earlier in the day.

By the way, if you are counting, that is the second player the Peter the Patient has given away for nothing on the waiver wire this year.  The first was Matt Fraser, who the Edmonton Oilers claimed just prior to the first of the year.  Fraser, of course, was part of the Tyler Seguin deal to the Dallas Stars, a deal that looks worse with each passing day.  But I digress.

Once again, at his press conference following the trade deadline, Chiarelli spoke about the difficulties of getting a deal done throughout the year, not just up against the clock as the time to make a trade approached.  Despite the number of deals that were done in the weeks leading up to the deadline by other general managers throughout the league, somehow the B’s GM could find one that was right for his struggling hockey club.

This just in, as my dearly departed mother would say, if the job was easy, everyone would do it.  Chiarelli complained of the high prices that were being asked for players saying, “What used to get done with a fifth (round pick), now takes a second.  And I don’t know why.”  Um, well, that’s obvious.  That is why Isles GM Garth Snow was laughing all the way to the dump in Uniondale when he fleeced you for Boychuk prior to the season.

I am pretty certain any other GM in the league without the initials “PC” in his name would have held on to the burly backliner, if only to reap the rewards of an overspending free for all by dealing him at the deadline.  I guess that “rebuilding” of the fourth line that he spoke about following the end of last season, and has been sooo successful thus far this year, wouldn’t have been possible without the likes of Gregory Campbell, Daniel Paille, and Chris Kelly and their nearly $6 million in salary hanging around the team’s neck.

So now the Bruins find themselves in a very unenviable situation.  They have to find a way to get a deal done for restricted free agent and future leader of the defense, Dougie Hamilton, this summer, as well as unrestricted free agent Carl Soderberg, while rebuilding on the fly with what the league perceives as a lame duck general manager.  To add insult to injury, their stockpile of talent on the farm is not exactly immense and is the main reason the team is where they are today.

Time will tell whether the Bruins actually got better by adding the likes of Connolly and Talbot today, but one thing is sure.  Team president Cam Neely and ownership need to decide what direction they want their team to take this off-season, and whether their patience for Peter has finally run out.