PAWSOX PROPOSE 30-YEAR COMMITMENT TO PAWTUCKET;
CLUB TO COMMIT $45 MILLION TOWARD
“A BALLPARK AT SLATER MILL” TO OPEN IN 2020
Making the largest private investment in city’s history,
Club to pay over 61% of ballpark construction costs and all construction overruns;
Ballpark-related revenues would cover state’s portion, shielding taxpayers

PAWTUCKET, RI — The Pawtucket Red Sox and the City of Pawtucket, with substantial advice and direction from the leaders of the Rhode Island Commerce Corporation, have reached agreement on a proposal that would keep the team in Pawtucket until at least 2050 with a 30-year lease extension if a plan for a ballpark that is designed to revitalize downtown and the riverfront is approved by the Governor and the State Legislature. The plan is today being presented to the Governor, the Speaker of the House, and the President of the Senate for further review and consideration.

The PawSox would pay $45 million, the largest private investment in the history of Pawtucket, according to city officials. The ballpark is estimated to cost $73 million; thus, the club would pay 61.6% of ballpark construction costs. In addition, the minority investment by the State of Rhode Island would be paid back by revenues that are generated by the ballpark and the ballclub, enabling the project to proceed with no new taxes or increases in tax rates. The project will effectively pay for itself from the revenue that it generates. Taxpayers also will be protected by the PawSox, who will take on all ballpark construction cost overruns.

A “Ballpark at Slater Mill” will be part of a larger downtown re-development project. Together, the ballpark and land are expected to cost $83 million; thus, the PawSox would pay about 54% of the entire ballpark and land cost. Even so, the public would own the ballpark and the land, continuing the city’s 75-year practice of providing a public facility. In turn, the PawSox would then pay the highest rent in the International League, increasing their rent in 2020 to $1 million, with annual increases, and devote $500,000 annually from naming rights to help finance the ballpark.

In addition to the $45 million from the PawSox, a three-way partnership would include approximately $23 million from the state and $15 from the city, although the precise allocations between the two public entities are still to be determined. The state’s portion, however, would be self-sustaining and self-supporting by tax revenue generated by the ballpark and the team’s activity and presence. Revenue sources generated by the project–such as sales, property, and visitors’ sales and hotel taxes—would fund the state’s portion, ensuring no new tax burden on Rhode Island taxpayers.

“We have all reached agreement on a proposal to present,” said Pawtucket Mayor Donald R. Grebien. “After collaborative discussions and extensive negotiations over the past several months between and among the City, the PawSox, and the Commerce Corporation, it is time to widen the circle and bring this proposal to the Governor and the State Legislature for their consideration and approvals. Without doubt, we are writing a new chapter in the history of Pawtucket.

“Virtually everything about this proposal is the opposite of where we were two years ago. Back then, the PawSox were all but gone. There were two strikes and two outs in the bottom of the ninth, and we were down to our last breath of hope and faith. Now, we are on the verge of completing one of the greatest comebacks in baseball history—and it includes the largest private investment in our city’s history.

“I can’t say enough about how the PawSox owners have stepped up to the plate. Over the last 10 years at the Triple-A level, the public sector has on average funded 70-75% of public ballpark project costs and the team has invested about 25-30%. Larry Lucchino and his partners have come to understand the special circumstances in our city and our state—and they have agreed to pay the majority of construction costs of a new ballpark—even though we, the people of Pawtucket, would own it. And remarkably, the PawSox will take the risk of construction cost overruns.

“Only with months of hard work and good work have we been able to craft this framework that we can now take to the state’s elected officials for review and consideration.”

As part of the proposed agreement, the club’s partners who live or who own separate businesses in Rhode Island will voluntarily donate annual PawSox distributions or dividends, if any, over the next five years to three Rhode Island charities: the Pawtucket Foundation, the Rhode Island Foundation, and/or the PawSox Foundation. This unusual commitment of operating profit was initiated by Paul Salem, the newest partner in the club, whose new role and commitment, especially to ancillary development, helped to forge this framework.

The commitment of $45 million is also believed to be the largest private contribution to a public ballpark in Triple-A history, according to league officials.

The proposed agreement commits to a public facility with year-round uses designed to be a catalyst for redevelopment and economic growth. 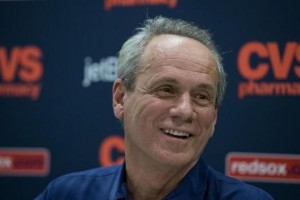 “It will be more than a ballpark,” said PawSox Chairman Larry Lucchino. “It will be a city park, open year-round. It could have football in the autumn, hockey in the winter, concerts in the summer, and joggers every day when the team is out of town.

“From a baseball standpoint, it would have Fenway Park’s playing dimensions, high tech innovations, and the PawSox’ tradition of affordable pricing. And importantly, it will take the franchise from financial uncertainty to stable financial condition, and make the professional baseball business sustainable in Rhode Island for the long-term.”

“I could not be happier with this framework of an agreement,” said PawSox Vice Chairman Mike Tamburro, who has been with the club for 43 years. “Never in my wildest dreams did I envision a day when we could make such a commitment in time and such a commitment in dollars.

“I’m proud of our partners, and I am thrilled for the City of Pawtucket and our great state. We have shaped a plan in which the taxpayers win and are protected. Just as Ben Mondor saved the day 40 years ago, this plan saves the day for the next 30 years.”

“Pawtucket has a unique opportunity to use the drawing power of a ballpark to serve as a catalyst in the redevelopment of our city,” Grebien said. “It is a special opportunity in time we don’t want to miss. This proposal that we have agreed upon is fair, and a $45 million private investment for a publicly-owned ballpark is unheard of. The PawSox will pay the majority of the cost for a year-round facility that belongs to us—the people of Pawtucket. Plus, they will pay cost overruns. This is an unprecedented deal.