Pats/Revis relationship was always a marriage of convenience 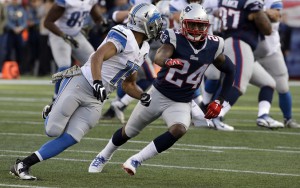 In retrospect, the year that Darrelle Revis spent with the Patriots feels a little dirty, does it not?  Let’s face it, this relationship was never based on love.  Simply put, it was two parties that desperately wanted two different things, and used each other to get what they wanted.

For his part, Revis wanted to get paid and ultimately he wanted the team that paid him to be the New York Jets.  It is the reason he had his agent structure the deal with the poison pill in the second year, so he could once again become a free agent after his lone season with New England.

For the Patriots – and Bill Belichick in particular – having Revis on board for a year gave them the best chance to win a Super Bowl since 2007, when their once dominant defense was beginning its decline.  Belichick likely knew that Revis wasn’t long for Foxboro, the fact that Revis’ team tried to get him back to New York before they were rebuffed by the Jets numbskull owner last off-season, was evidence enough to show the player’s ultimate intentions.

So where does this leave the lovelorn residents of Patriots Nation?  In a swoon, of course, just like any other jilted lover who has seen their powerful passions go unrequited.

For the better part of the last calendar year – except for the first four weeks of the season when the sky was seemingly falling in Foxboro – the dynasty Pats of the early part of this century were back.  New England not only had an offense that featured the best quarterback to ever play the game in Tom Brady – who had at his disposal a healthy and unearthly target in Rob Gronkowski all season for the first time since 2011 – they also had a shutdown defense led by the best cornerback of his time in Revis.

Talk about a total package.

As far back as training camp there was wishful thinking that the Patriots would extend Revis long before they had to.  There were whispers of owner Robert Kraft being so impressed by his new bauble that he himself spoke to the cornerback about extending his time with the team.  After the team won the Super Bowl in February, most in the know thought the team would step up and guarantee Revis would be the highest paid corner in the game, therefore removing any chance that he reached free agency.

But, of course, it didn’t happen.  And the reason it didn’t happen is because neither side really wanted it to happen.  This was the classic friends with benefits relationship for both sides from the start.  Each filled a desire for the other, but neither one wanted to commit.

But hey, who can scoff at the results?  With Revis’ help, Belichick and Brady cemented their legacy as the best coach/quarterback tandem to ever grace the game by winning their fourth Lombardi trophy in six tries, and Revis ended up with the deal he wanted in the place he wanted to be.

So why does it feel so sullied?

Perhaps the biggest reason the kicked to the curb members of the Nation are so upset today is that the relationship meant more to us than it did to them.  The ring to Revis seems almost secondary at this point.  Ultimately – if he was to speak candidly enough to actually answer – the question for Revis is this.  If Malcolm Butler dropped that ball at the Pats goal line a little over a month ago and the Patriots went on to lose the Super Bowl to the Seattle Seahawks,  would things be different today?  In all likelihood the answer would still be “no.”

And while I believe that Belichick desperately wanted another title to silence his critics when it came to Spygate, and ultimately Deflategate, there is no doubt – based on his actions in these negotiations – that he would rather his team be very good for the next 5 years, instead of being great for the next 2 or 3.

Ultimately, those who got left in the lurch are the folks who pay the bills; the fans. Anyone that remotely pays attention to the sport could see the way things were set up for the twilight of Brady’s career with Revis in the fold for the next few seasons.  It was nary a question of the team making it back to multiple Super Bowls, it was simply a question of how many they would win.

But now the hottest chick the team has seen on the defensive side of the ball for over a decade just left you for your biggest rival.  A rival that is the equivalent of a pimply, snot-nosed kid that still lives in his mother’s basement.

And, oh yeah, then there is that little thing about seeing him twice a year in the uniform of his true love, while you are left with the Alfonso Dennard’s and Kyle Arrington’s of the world, getting beat like redhead step children on a weekly basis.

Darrelle Revis doesn’t love you Patriots Nation.  Never did and never will.  But hey, the sex was great while it lasted and you did get another ring out of the deal.  Too bad it may be the last one you ever see with Tom Brady as your quarterback.