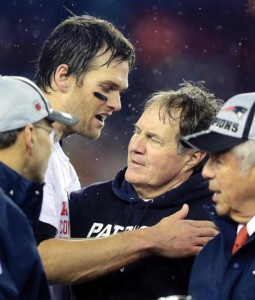 After nearly two weeks of batting back accusations of under-inflated footballs playing a part in determining the legacy of the team they love, members of Patriots Nation – whether they are willing to admit it or not – have to know in their heart of hearts that Sunday’s Super Bowl is so much more than just a chance to win a fourth Lombardi trophy in the last decade.  For the team, and its adoring multitude of maniacal fans, this game means so much more.

In fact, it can be argued, that the results of the contest – one that has been barely spoken about without the mention of pounds per square inch of air pressure in an NFL football – will determine whether their coach and quarterback will go down as the best ever, controversies be damned, or as a pair of miscreants who can’t win a thing without cheating.

Harsh, maybe.  But it is true and you know it.  The cries of “Cheater!” – which already echo loudly in every part of the country except New England – will only grow louder should the Pats lose, and stick to the team and its fan base more than ever before.

It is simple, really.  Win, and the team – and thereby Patriots Nation – can waive any chosen finger at the rest of the sports world and shout, “Kiss the rings!”  Lose, and they will be the butt of every “Spygate” and “Deflategate” joke that has ever been, or will be, written.

You know it’s true, Pats fans, that’s why you are beginning the get a pit in your stomach like never before as Sunday approaches.  You know that – whether you are willing to acknowledge it or not – the way the last 14 or so years will be looked at by the sporting public will largely be shaped by what the scoreboard reads at the end of Sunday evening, and that worries you like no game has since this long and winding road began, after Drew Bledsoe was bludgeoned by Mo Lewis on September 23, 2001.

One of the original Patriots, John Adams, once said, “Facts are stubborn things.”  The facts for the Pats and their fans are as follows.  Not since falling short of the perfect season in 2007, when they lost the Super Bowl to the New York Giants and David Tyree’s Velcro helmet, have the Pats had a team that is as good as the one that will take the field against the Seattle Seahawks on Sunday night in Glendale.  There is no telling if they will ever get this close again with a team this talented again.

As much as you hate to think about it, you know that this may be the last time Tom Brady and Bill Belichick get to silence their critics who say that Spygate is the reason they won three titles.

If this one slips through their hands this Sunday, it will not only reinforce that popular opinion across the country that the best coach/quarterback combo in the history of the game can’t win on the up and up, it will diminish in the eyes of NFL fans across the globe, the greatness they have displayed for nearly a decade and a half.

Admit it, that’s why the talk of Deflategate goes up your keister sideways.  Defend them as you might – and there has been no lack of a very loud defense from members of Patriots Nation – deep down inside you know it’s true.  If there had been no investigation by the NFL into the air pressure in the balls the Patriots used during the first half of the AFC Championship game two weeks ago, the stakes in the Super Bowl would have been high, but not nearly as legacy threatening as they are now.

Protest as you may, Pats fans, but the truth is, no one but you and your brethren are listening anymore.  No one outside Patriot Nation cares that everyone does it.  No one but you are concerned about what gauges were used to measure the balls, or about the outlandish suggestions that the weather affected New England’s footballs but not Indy’s.  And no one cares that 80,000 people could see the Jets coach giving defensive signals that you video taped after being instructed by the league not to and that – according to Bill Belichick – others were doing it at the time too.

The elephant in the room has been exposed, and it now has white-hot spotlights shining down upon it.  Super Bowls are legacy games by nature, and there has never been any bigger than the one that awaits Belichick and Brady this Sunday.

If the Patriots are victorious, there will be no defiling this dynamic duo’s place in the history of the game, no matter how loud the shouts get from a jealous majority.  But should they lose, the name Patriots will be synonymous with the term cheaters, in every part of the country but here.

As if the pressure of winning their fourth Lombardi trophy isn’t enough, the whole “playing to save their name” adds another level.  Make no mistake, there is nothing short of the legacy of the franchise you love on the line Sunday night, Patriots Nation.

Enjoy the game if you can.