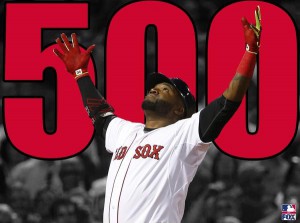 ANOTHER CENTURY: David Ortiz drove in 2 runs with a homer in the 1st inning last night and now ranks 6th in the AL with 101 RBI…He crossed the 100 RBI plateau for the 9th time in his career, all as a Red Sox, tying Ted Williams for the most in 100-RBI seasons in team history.
· Ortiz, who also ranks T-6th in the AL with 36 HR, his highest single-season homer total since hitting a club-record 54 long balls in 2006…This is his 6th career season with at least 35 HR and 100 RBI, passing Jimmie Foxx and Manny Ramirez (both 5) for the most in Red Sox history.
· Ortiz also has extended his club record with a 9th career 30-HR/100-RBI campaign (Ted Williams is 2nd with 7)…He joins Babe Ruth (12 times with NYY) and Lou Gehrig (10 times with NYY) as the only players to reach at least 30 HR and 100 RBI in as many as 9 different seasons for a single American League team.