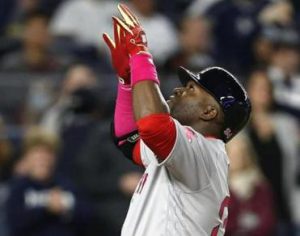 When David Ortiz points to the sky after his home runs, he does it as a tribute to his mother, Angela who passed away in a car accident 14 years ago. Last night, on Mother’s Day, Big Papi had a memorable night with two home-runs, the first blast allowing him to pass Hall of Famer, Carl Yastrzemski for second on the team’s all-time list. With 512 career home runs, Ortiz passed Mel Ott and is now tied with Eddie Matthews and Ernie Banks for 22nd on MBL’s all time list.

So when asked about last night’s two home runs, Ortiz replied, “Today is a very special day for all of us. I think I picked a really good day to hit two homers…on Mother’s Day. My mom passed away 14 years ago. I know she’s in a place watching me. It’s a special day.” 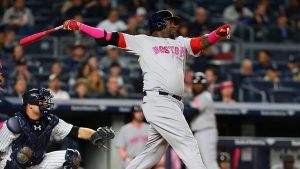 Ortiz now has 512 home runs in his career with 454 of them playing for Boston. He continues to say that he will indeed follow through with finishing his career at the end of the 2016 season and hang up his #34 jersey here with the Red Sox, but anyone watching David Ortiz play the start of his “retirement” season is wondering…why not play longer?? With six homers in his last nine games and with five home runs against the Yankees already this year, (and in only six games) many people are really wondering if this is the end. After last night’s hits, Ted Williams is the only Red Sox player to have more home runs. The Red Sox finished the night with a 5-1 win over the Yankees. Now they are home for the week with games against the Athletics and Astros.